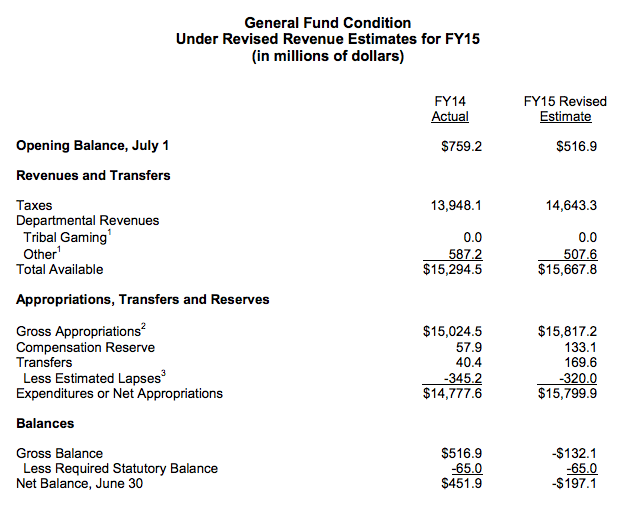 State on course to finish FY15 with $132 million deficit

The Department of Administration released a report Thursday showing that if every state agency received the funds they requested for the next biennium, Wisconsin would find itself in a $2.2 billion hole by 2017.

The DOA report totaled all agency budget requests, which were submitted this fall, and provided state revenue estimates for the current 2015 fiscal year (FY), FY2016 and FY2017.

In July, Governor Walker asked all state agencies to assume there would be no budget increases over the FY2015 “base level” for all agencies, or just over $35 billion. Many agencies ignored this request, however, and the DOA report shows that total budget requests exceed the base level by $3.35 billion at the end of FY17. This represents a 10 percent overstep from the base level requested by Walker.

General Purpose Revenue (GPR) spending requests came to $16.7 billion in FY16 and $17.7 billion in FY17. This would be a 4.8 percent hike in GPR spending the first year of the biennium and a 6 percent jump in the second year. GPR is made up of state taxes and fees such as the state income tax and it is the revenue source the state has the most control over making GPR dollars very precious.

The biggest offenders to Walker’s budget request rule are the Department of Health Services (DHS) and Department of Public Instruction (DPI). These two agencies asked for a combined $1.46 billion in additional state money for the new biennium, an increase of 12.4 percent at DHS and 6.3 percent at DPI.

FY16 revenue projections are slightly less ambitious, expected to increase by $392 million, or 2.68 percent, but would still hit a new milestone at $15 billion in total collections.

The complete picture is not so rosy for FY15 as the report indicates that the state is currently on pace to finish the year with a $132 million deficit.

DOA Secretary Mike Huebsch stated in the report, however, that “the shortfall noted above will be addressed and the current biennium will end in balance.”

Huebsch went on to explain that the expected year-end shortfall is largely caused by a federal tax anomaly. The Affordable Care, otherwise known as Obamacare, introduced a 3.8 percent “surcharge” on investment income that began in 2013. Another tax increase, this one in capital gains, also kicked in at the start of 2013. DOA blames these tax increases for causing state taxpayers to “divest” in 2012, harming future tax collections.

If all state agency budget requests are granted in the new biennium, state spending would exceed revenue collections by around $1.1 billion in both FY16 and FY17, resulting in an overage of $2.2 billion over the biennium.

DOA’s report also reiterated that Wisconsin finished FY14 with a $517 million surplus, the result of spending restraint over the year.

The final part of the DOA report outlines expected economic growth in Wisconsin over the next few years. Slow, but steady increases to state gross domestic product are predicted to occur in the next three years, contributing to employment growth and and greater personal income moving forward.

Joint Finance Committee Co-Chairs Alberta Darling (R-River Hills) and John Nygren (R-Marinette) praised DOA’s economic news in a press release. The Co-Chairs also pointed out that the report is based on agency requests that are unlikely to make the final budget.

“We are proud to see our reforms continue to drive unemployment rates down -our rate dropped to 5.4% in October,” said the Co-Chairs. “While Democrats will claim the sky is falling. These numbers are an exercise based on agencies wish lists which will not find their way into the Governor’s budget.”

Assembly Speaker Vos (R-Rochester) had similar comments in his press release on the DOA report.

“The numbers put out today show what it would cost to fund everyone’s wish list. The reality is that’s not going to happen,” explained Vos. “We will continue to manage the state’s finances by making prudent decisions and doing what’s best for Wisconsin and its taxpayers.”

“Wisconsin families are rightfully concerned about our state’s shrinking revenue base and the lack of economic growth,” said Shilling. “The slash-and-burn approach to budgeting over the past four years clearly hasn’t worked.”