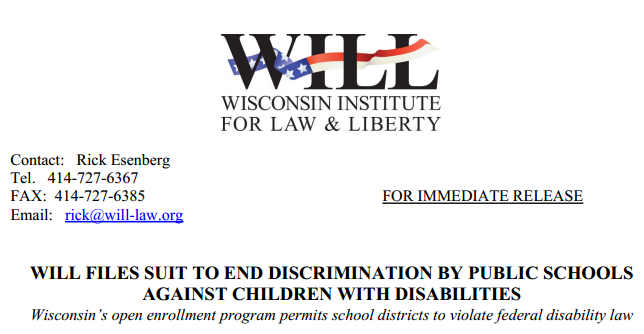 A new lawsuit aims to help parents of students with disabilities find the right schools for their children. The Wisconsin Institute for Law and Liberty (WILL) filed suit on behalf of four special needs students on Wednesday, alleging that the state’s open enrollment program discriminated against them due to their exceptional status.

The suit alleges that the state’s open enrollment program failed these students by turning down their applications to attend a school other than the traditional public institution in their neighborhood. These pupils were denied attendance at new schools by administrators who cited added costs as the reason for denying these new students. These rejections, WILL argues, were part of a quota imposed in local district that dictates how many special needs students separate from their enrollment limits for students without disabilities.

The lawsuit alleges that this separation is illegal under Wisconsin law. Separating special needs students allows districts to discriminate against these pupils. In 2013-14, more than 1,000 exceptional children were denied open enrollment due to these quotas.

This is not the first time the state’s open enrollment program has come under fire for its limitations in handling special needs students. Senator Leah Vukmir (R-Wauwatosa) and Representative John Jagler (R-Watertown) introduced legislation in 2014 that would grant vouchers to students that had been turned down for open enrollment transfers in the past. While that legislation did not become law, it did lead to some heated discussions between lawmakers and parents at the Capitol last spring.

While Wisconsin’s open enrollment program services a large majority of the students and families that apply for it, there is no doubt that some families are being left behind. This WILL lawsuit alleges that picking and choosing students based on their disabilities – or lack thereof – is an unfair practice that leaves some families of exceptional students in the lurch. With special needs vouchers still just a theory in Wisconsin, this may be the only way to give the state’s parents of special needs students the greatest opportunity to find the schools that work for their children.