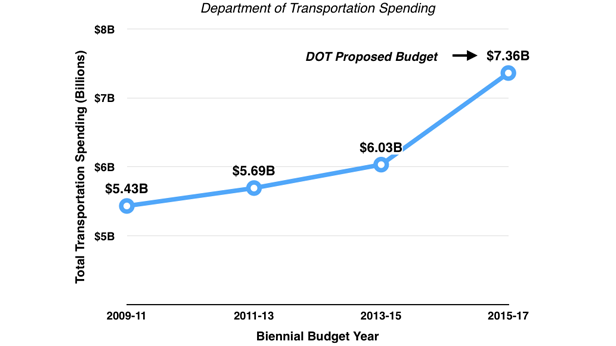 [Madison, Wisc…] Department of Transportation (DOT) Secretary Mark Gottlieb submitted his 2015-17 budget proposal on Friday that includes more than $750 million in tax and fee increases and $1.36 billion in additional spending.

Gottlieb submitted his budget in a letter to Department of Administration Secretary Mike Huebsch and Gov. Scott Walker, calling the proposal a “blueprint” to shore up the state’s transportation funding.

“This request puts the Transportation Fund on a firm financial footing over the long term and provides a blueprint for meeting the significant needs we face across all transportation modes in all areas of the state,” Gottlieb wrote.

The new taxes and fees include a restructuring of the gas tax, an additional registration fee on hybrid vehicles, an increased tax on the purchase of new vehicles and funding from the state’s general fund.

The proposed restructuring of the gas tax would change it to include both a fixed rate and a variable rate – based on the average wholesale price of fuel. The variable rate would also have a floor to ensure the revenues raised would not drop below a certain amount.

The gas tax changes are expected to increase revenues by $358 million.

To make up for more fuel-efficient vehicles, the proposed budget would add a $50 fee to the yearly registration for hybrid and electric vehicles. The $50 fee would be in addition to the $75 fee to register a vehicle in the state.

The largest increase in taxes and fees would be seen from the new Highway Use Fee proposed in DOT’s budget. It calls for an additional fee of 2.5 percent of the manufacturers suggested base retail price (MSRP) for all new cars purchased. The fee would be in addition to the typical sales tax paid by a consumer.

It is expected to raise $379 million in new revenues for the state and would only apply to the purchase of new vehicles. An example provided by the department said it would add $800 to the cost of a $32,000 new vehicle.

DOT’s plan also calls for $224 million in additional revenue from the state’s general fund. Currently, 0.25 percent of the general fund’s “taxed moneys” is to be deposited into the transportation fund. The department’s proposed budget would increase that amount to one percent.

The new taxes and fees that are proposed in DOT’s 2015-17 budget are to cover a jump in spending of about $1.36 billion, an increase of 22 percent over the previous budget.

The past two budgets have seen DOT spending increases of less than 1.5 percent over the base-year doubled, which is used to determine the operating costs for the next budget.

The major transportation projects in the Milwaukee area are projected to cost $791 million over the biennium.

DOT also plans to invest in many other programs and initiatives within the Department of Motor Vehicles and the Division of State Patrol.

The state’s transportation funding struggles come at the same time that the federal government is facing budgetary uncertainty, especially within the Highway Trust Fund.

Governor Walker is expected to make adjustments to agencies’ budget requests before introducing his version of the budget to the legislature early in 2015.

The full budget proposal from the DOT is available by clicking here.