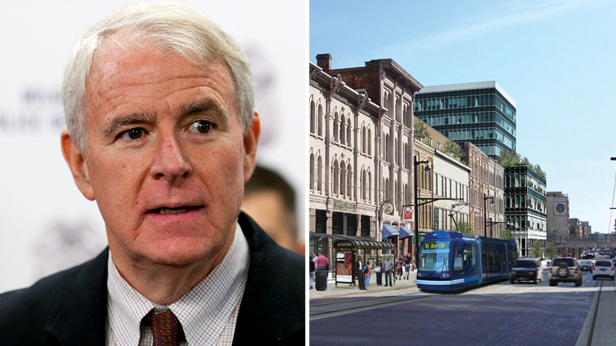 Milwaukee Mayor Tom Barrett has a new scheme worked out to get his fixed-rail streetcar built. He’s going to increase the project’s size and cost. According to the Milwaukee Business Journal, Barrett’s new streetcar plan would make the track 4.6 miles in length and the project would cost $123.9 million. That’s an increase of $59.3 million, or nearly double what was originally planned.

The whole expansion scheme reveals a basic problem with fixed-rail systems. Unlike with a bus that runs on existing city streets, the new streetcar system requires new infrastructure to be built every time it changes a route.

The Couture was not in the original plan for the Milwaukee Streetcar. When the city decided to add the location to the system, a significant expenditure had to be included in the plan to build the expanded rail infrastructure.

Fortunately for Barrett, a ready source of funding was found in the TIF district, although it begs the chicken and egg question. Did a need for a spur to the Couture come first, and then the funding from the TIF district was a side benefit? Or was the TIF district revenue needed from the new development and that gave birth to the streetcar spur?

It’s also the reverse of the purpose of TIF districts. Tax Incremental Finance (TIF) districts are supposed to be used to pay for improvements to encourage development. The increased tax revenue from the development is diverted to the associated infrastructure costs. Eventually the TIF expires and the developed area produces more tax revenue for the municipality than if the TIF district had not been created.

But aside from those problems, there is the additional problem of using the revenue from two entire TIF districts to fund infrastructure that, at best, will only increase development at the points where the streetcar stops, probably at the expense of development from elsewhere within the TIF districts. That’s because with a fixed-rail system, people can only onboard and exit the streetcar at the designated stops. Along the track is just a nice view – hopefully. So even within the TIF districts there is a diversion of tax revenue that may actually be contrary to the interests of those whose taxes are being used to subsidize the streetcar.

Using the TIF districts to subsidize the construction of the streetcar can be seen as a concession that Milwaukee is likely to lose the lawsuit against the Public Service Commission and the city will not be able to push the utility infrastructure relocation costs onto the rate payers. However, using the TIF districts shows that Barrett still wants a subsidy for his streetcar from those who will not benefit from it. Whether it’s the revenue from the properties within the TIF districts or from the city as a whole, Barrett’s taxpayers are paying for a ride many of them don’t want to take.