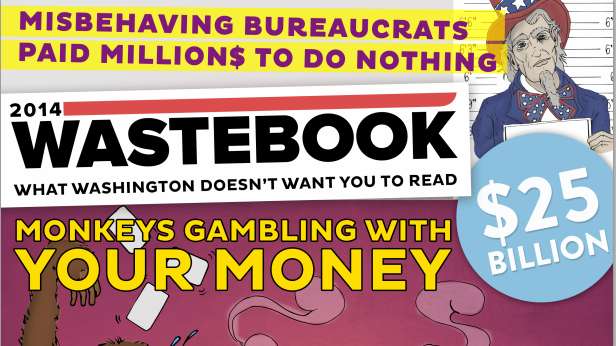 Outgoing U.S. Senator Tom Coburn (R-OK) released his last edition of “Wastebook” on Wednesday, bringing attention to outrageous examples of federal spending including $387,000 to give Swedish massages to rabbits and $371,000 to study if moms love dogs as much as they love kids.

Senator Coburn identified 100 instances of ridiculous spending worth $25 billion in this year’s Wastebook.

One of the more egregious examples is $19 million in paid leave for some 60,000 federal employees who received at least a month or more of pay without work. Many of these employees were caught in misconduct at work or charged with criminal offenses such as sexual abuse and drunk driving.

The federally funded National Science Foundation was also given $5.2 million to develop a game called FutureCoast, which “attempts to teach people about what the future might hold if climate change makes the seas rise.”

Closer to home, Chippewa Valley Regional Airport was granted $150,000 to help “market the airport’s services,” even though it only provides service to Chicago O’Hare International Airport.

Federal funding for pet projects has continued despite a national debt that is fast approaching $18 trillion dollars.

Coburn is set to retire at the end of the year, but Wisconsin Senator Ron Johnson (R) has expressed interest in taking up the Wastebook project in the future.