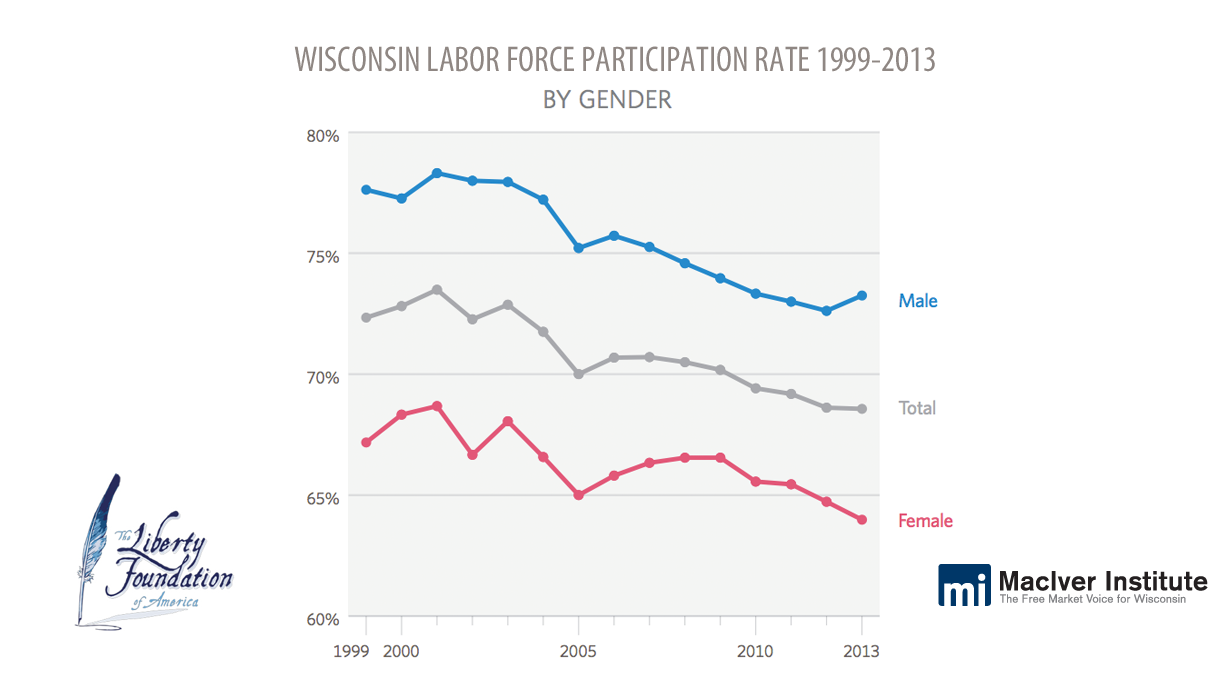 The number of people in Wisconsin 16 years or older who are working or actively looking for work was 9th best in the country in 2013 at 68.6 percent. While Wisconsin’s labor force participation rate remained unchanged from the previous year, the 68.6 percent figure is still a 15 year low.

The labor force participation rate is a number tracked nationally by the federal Bureau of Labor Statistics (BLS) and in Wisconsin by the State’s Department of Workforce Development.

Labor force participation provides fuller context for America’s employment situation than the standard unemployment rate because a higher participation rate shows greater confidence in the economy. The weakness of the traditional unemployment number is that it does not include those individuals who have stopped looking for a job altogether. If more people are entering the workforce it means more people believe they can find jobs, while a drop in the labor force usually means people have given up the search for work.

North Dakota is the beneficiary of an energy production boom that has created many jobs for its residents and has encouraged more people to move there for work. Washington, DC continues to benefit from being the political center of America, drawing capital and jobs to the District even during the recession and slow recovery.

Wisconsin’s combined labor force participation rate in 2013 was 68.6 percent, which was 9th best among the 50 states and the District of Columbia and nearly six points better than the national average according to numbers put together by the non-partisan Liberty Foundation.

Wisconsin’s participation rate has slowly declined since 1999, including a 3.7 percent drop during the Doyle Administration years of 2003-2011. 2.2 percent of that drop came before the recession in the years 2003-2007 where BLS data show the labor force gained less than one-third of new potential participants.

The Liberty Foundation also ranked the states and Washington, DC on their 2013 average traditional unemployment rate, classified as the U-3 rate by the BLS. The labor force participation rate and unemployment rate are broken down by gender, race and age group.

Looking at Wisconsin’s numbers in these subcategories shows a mix of good and bad news.

For women in Wisconsin, 2013’s participation rate of 64 percent also ranked 9th best, and the combined unemployment rate for women was 5.4 percent in 2013, or 12th best.

Wisconsin’s minorities did not fare as well in 2013.

In 2013, 67.2 percent of Hispanics participated in the labor force in the Badger State, coming in at 30th out of 47 states measured. Unfortunately, Wisconsin’s unemployment rate of 14.5 percent for Latinos shows how the group has struggled since the recession.

A very encouraging sign is the fact that well over 80 percent of Wisconsinites between the ages of 20 and 54 were either working or looking for work in 2013. Participation rates of 82 percent for 20-24 year olds and 88 percent for 35-44 year olds both ranked second in the nation last year, and rates for the age groups of 25-34 and 45-54 also made the top ten. This indicates that Wisconsinites in their prime working years are showing a degree of confidence in the Wisconsin’s economy relative to most other states.

Wisconsin’s traditional U-3 unemployment rate has also come down by nearly a full point in 2014 at 5.8 percent compared to 2013’s average of 6.7 percent.