The Racine Unified School District earned the equivalent of a “C-” on the Department of Public Instruction’s School Report Cards in 2014. However, the majority of the district’s schools – 17 out of 30 – were given “D” grades or worse by the state.

In all, RUSD’s traditional public schools averaged 63.2 points out of a possible 100 from the statewide accountability system.

Racine’s elementary schools had higher grades, on average, than their middle/high schools. These institutions failed by a significant margin when it came to state standards for student achievement, but higher grades in closing gaps and on-track and postsecondary readiness helped the district earn a “meets expectations” grade.

The city’s lone charter school – a hybrid middle and high school called the REAL School – outperformed the district’s average report card score for 2013-14 thanks to higher achievement and postsecondary readiness scores. However, the school trailed its peers in both student growth and closing gaps. The REAL School also had a smaller concentration of special needs students and economically disadvantaged students than the average Racine public school.

IB Talented and Gifted School Jefferson Lighthouse Academy recorded the district’s only “Significantly Exceeds Expectations” grade. Two others – the Walden III middle and high schools – were labeled as “Exceeding Expectations” by the state.

Conversely, the city was home to three failing schools as well as 14 institutions that earned the equivalent of a “D” grade: 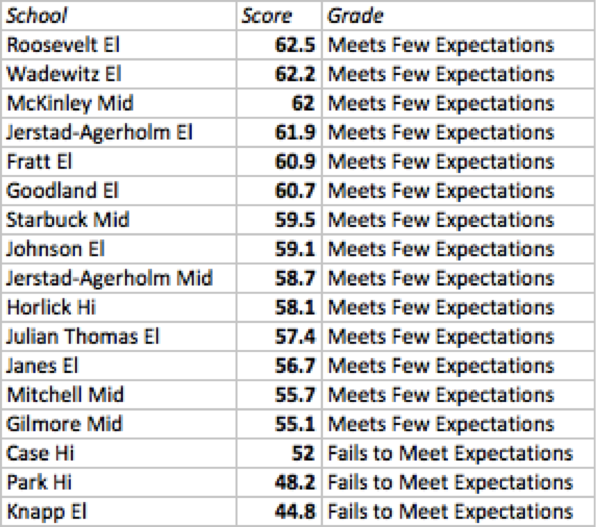 These data show that while Racine has a handful of standout schools, the majority of their K-12 classrooms fail to meet Wisconsin expectations. This poor performance helps to explain why a district-specific voucher program has been so popular in the city. [LINK: http://www.maciverinstitute.com/2013/11/racine-voucher-enrollment-doubles-in-first-year-without-participation-cap/] With report cards set to take root in the state’s voucher schools by 2017, we’ll have a better idea of how all public options shape up in Racine.

Just 12 miles away, Kenosha lies in the same geographic area as Racine but put together a stronger performance in their public schools. The Kenosha Unified School District (KUSD) scored an average of 65.65 points out of 100 on the state’s School Report Cards for 2013-14, earning the equivalent of a “C-” from DPI. The district did not have a single school that failed to meet the state’s expectations.

Unlike Racine, Kenosha has multiple charter schools that give us a better idea of the overall difference in performance between instrumentality charters and traditional public schools in the district. There are five charters in the district, four of which earned numerical grades (the fifth, the Kenosha eSchool, earned an alternative rating for satisfactory progress due to a difficult to measure student body). On average, those schools outperformed the traditional public school average by more than nine points in 2013-14. This was the difference between the equivalent of a “C-” and a “B-” on the statewide metric.

Kenosha’s schools bucked a trend that we have seen in Racine and other large districts by posting higher overall scores in high schools than elementary institutions.

Six Kenosha schools exceeded state expectations in 2013-14, though none earned a coveted “A” grade this year:

Conversely, 14 institutions earned the equivalent of a “D” grade, but none fell far enough to fail to meet the Wisconsin standards. 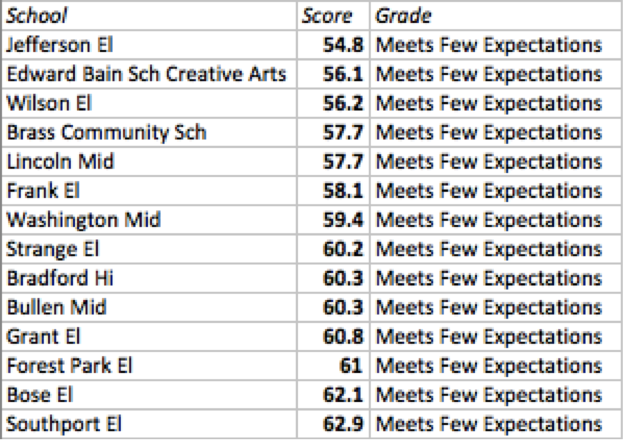 Three of the city’s four graded charter schools earned “B” grades as well.

These data show that Kenosha’s instrumentality charter schools are outperforming district averages – something that we did not see in Milwaukee Public Schools. However, since there are fewer charters in Kenosha and these schools educate fewer economically disadvantaged pupils than their peer institutions in Milwaukee, it’s difficult to make any significant statistical comparisons between the two.

The KUSD has a higher average score for its traditional public schools than Racine Unified thanks in part to zero failing grades on this year’s School Report Cards. However, only six of the district’s 35 schools earned “B” grades or better while 14 met few of the state’s standards and expectations for K-12 schools. That leaves plenty of room for improvement in the future – and with four charter schools either meeting or exceeding expectations, the district may have a blueprint for success right in front of them.

For Kenosha, an average traditional public school score of 65.65 represented a step backwards from 2012-13. That year, the district’s K-12 schools hovered in the “C” range with an average rating of 66.97. Meanwhile, Racine’s report cards rose from a “D+” to a “C-” in that same span when their scores increased from 62.07 to 63.20. While that’s a step in the right direction, these 2014 report cards show that there is plenty of work that still needs to be done in both districts.