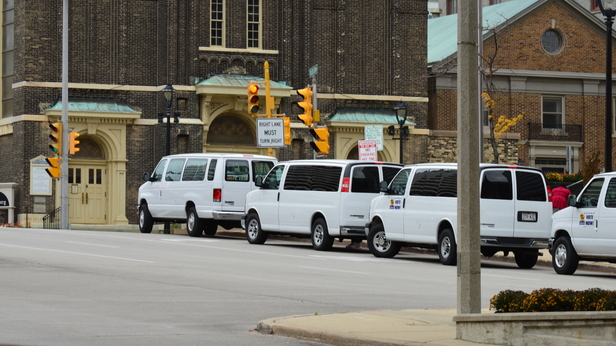 [Milwaukee, Wisc…] Election officials in the City of Milwaukee are sending mixed signals to voters about the privileges given to the left-wing organization, Wisconsin Jobs Now (WJN), and their early voting efforts for Democratic gubernatorial candidate Mary Burke.

As the MacIver Institute recently reported, WJN has organized a two-week voter drive in Milwaukee’s downtown neighborhoods. The group has at least ten vans being used to pick up Burke supporters at specific locations and times to drive them to the polls.

Once the vans arrived at Milwaukee’s Zeidler Municipal Building, they were given free rein to park in a right-turn lane and typical “No Parking” zone. They even used orange traffic cones to block the area while the vans were out picking up more Burke voters to ensure no one else was able to use the space for parking.

After witnessing this unusual coordination between the city and an organization clearly favoring one candidate in the governor’s race, MacIver reached out to Milwaukee’s Election Commission to see if WJN had been given special privileges or permissions.

Neil Albrecht, Milwaukee’s Election Commissioner, told MacIver in an email that the first space on East Kilbourn Avenue and North Broadway was for any vehicles providing transportation to voters.

“The City of Milwaukee designates voter and accessible voter parking for every election, at every polling place,” Albrecht said. “This courtesy to the city’s voters is also extended during in-person absentee voting.”

When asked about WJN’s actions and their use of orange cones to block parking spaces, Albrecht said there was no special treatment for the group.

“I do not know the origin of the orange cone,” he told MacIver. “If there was any confusion with any group regarding use of this space, it was limited to the first day and has since been corrected.”

Unfortunately, it seems like the issue was not cleared up with other officials working the polls during in-person absentee voting.

In response, on Wednesday October 23rd, the third day of early voting, Media Trackers staff moved the orange cones for other voters that needed parking. After assisting multiple vehicles into the spaces, another election official came out of the Zeidler building to tell them to stop.

The Milwaukee official told them the parking spaces were solely for WJN vans and that Media Trackers staff was not allowed to move the orange cones.

“These parking spaces are for us, the election commission, for these vans,” she said pointing to a WJN van. “You cannot move these cones.”

Media Trackers staff pressed the election official and again asked if the parking spaces were just for WJN vans, pointing out that another official told them it could be used by anyone as a drop-off location.

“No, no. These is for the vans,” she responded.

When asked again by Media Trackers staff if the spaces were just for the WJN vans, she confirmed that was correct.

However, responses from Albrecht seem to contradict his colleague’s statements. MacIver reached out to Albrecht on Thursday with specific questions and he responded later that evening, more than a day after Media Trackers’ discussion with a different official.

While Milwaukee’s Election Commissioner claims any confusion over the use of the parking spaces was solved on the first day of early voting, it seems like two days later other election officials were still coordinating with WJN’s early voting efforts.

The MacIver Institute will continue to provide updates as they come available.

The video of Media Trackers’ interaction with Milwaukee election officials is below: