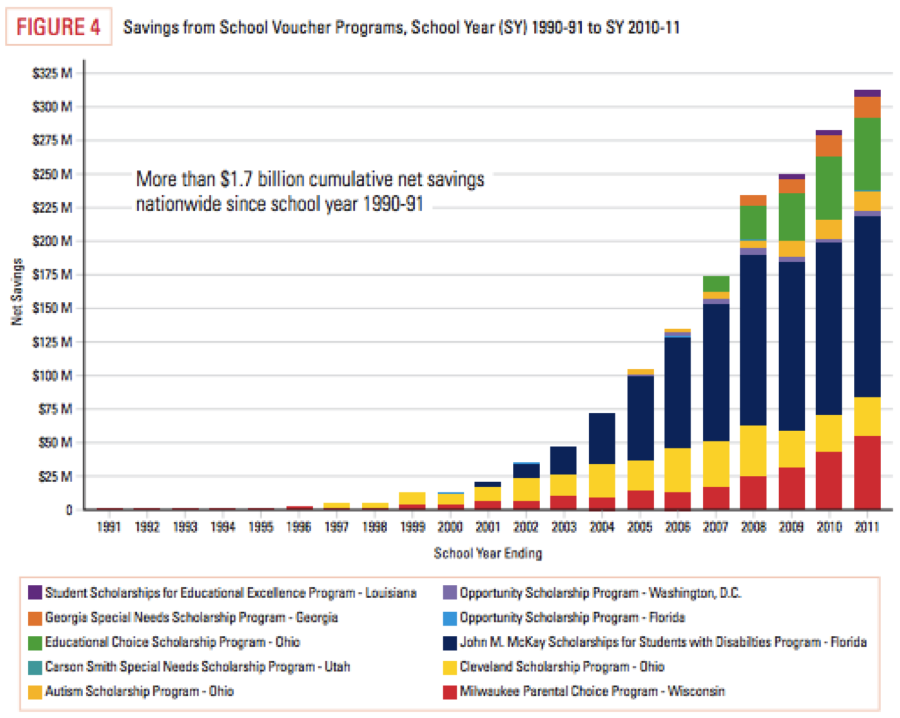 Americans have saved more than $1.7 billion in educational costs between 1991 and 2011 thanks to school choice programs. More than $238 million of that came from the Milwaukee Parental Choice Program (MPCP).

That’s the data from the Friedman Foundation’s latest School Voucher Audit, a study authored by Friedman staffer and former City of Indianapolis Chief Financial Officer Jeff Spalding. The audit examined the statewide savings related to 10 major school choice programs across the country. It used data that spanned from the 1990-91 school year to 2010-11.

The report backs up research from the School Choice Demonstration Project that showed that the MPCP wasn’t just financially viable for the state of Wisconsin, but that its savings increased over time as more students participated. While the overall savings were less in the Friedman study than in the SCDP, both pieces of research showed that Milwaukee’s voucher program was a source of significant savings throughout the state. The reason why Spalding’s overall figure was lower is due to his use of “variable costs” in public school funding. This accounted for money that schools would have to spend even when a student leaves and separated that from the funding that is adjustable in light of enrollment changes.

Since these data only reflect on the program’s finances from 1991-2011, they do not reflect the recent expansions that lifted geographical caps and made more students eligible by raising parental income limits in Milwaukee. These savings came from the significant difference between variable costs per student and the voucher cost per student. In 2011, this disparity was as much as $2,693 per pupil.

If trends held and these per-pupil funding figures continued to grow from 2012-2014, the overall fiscal benefit from the MPCP to the state of Wisconsin should be approaching $400 million in savings over its lifetime. While fruitful, that figure would still be half of what the nation’s most cost-friendly choice program has saved in only 12 years.

Florida’s John M. McKay Scholarships for Children with Disabilities Program is a special needs school choice program that awards funds to more than 20,000 students each year. The scholarship amount for these students is determined by the severity of their disability and the associated cost of educating these children. With an average savings of more than $6,000 per student between 2007 and 2011, the program has saved over $836 million for Floridians.

Spalding’s study reinforces the idea that school choice in America can be – and traditionally has been – a financially sound policy. Wisconsin has witnessed this firsthand due to low voucher costs and a high migration rate of students from traditional public schools to private ones. The Milwaukee Parental Choice Program has been a boon for Wisconsin since its inception in 1991. If these rising trends continue, it may save the state $1 billion by the time it turns 30.