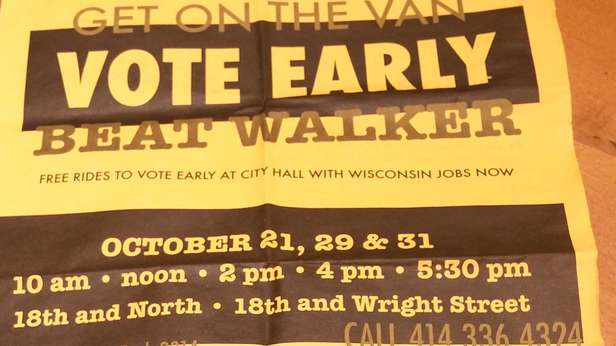 Group Commandeers Parking Spaces For Drop-Off Vans, Parking Meters Covered So They Do Not Need To Pay For Parking

[Milwaukee, Wisc…] Early in-person absentee voting started on Monday and there was a lot of activity around Milwaukee City Hall and the Zeidler Municipal Building.

In the lead up to the November 4th election, Wisconsin Jobs Now (WJN) is coordinating a massive get-out-the-vote (GOTV) effort to drive Mary Burke supporters to the polls to cast in-person absentee ballots. Wisconsin’s version of early voting allows anyone to cast an absentee ballot at his or her municipal clerk’s office the two weeks prior to the week of Election Day. This year, voters can cast a ballot while the clerks’ offices are open from October 20th to October 31st.

On Monday, WJN used approximately 10 vans to pick up voters from nine different locations around the city at five specified times throughout the day and delivered those voters to the Zeidler Building, which is located at 841 North Broadway in downtown Milwaukee.

WJN has spent the months leading up to the election talking about the need to raise the minimum wage through a non-binding referendum on the ballot, but their flyers that now blanket city neighborhoods carry a direct message about the Governor’s race in Wisconsin – beat Walker.

“Scott Walker, big corporations and the rich don’t want us to vote. But we’re all voting so we can change things in our community. When we beat Walker, we can win higher wages and an economy that works for us.”

Mayor Tom Barrett’s administration seems to working with WJN in their GOTV efforts. Early in the morning on Monday, a worker from the Department of Public Works put out at least four hoods over meters near the southwest corner of the Kilbourn and Broadway intersection, effectively disabling the pay meters and making the spots a no-cost place to park. WJN vans appeared to park in the now-free spots closest to the corner all day.

WJN workers also were allowed to use a traffic cone in the right-turn-only lane on Kilbourn Avenue to save this area as a parking spot for newly arriving vans to drop off transportees close to the entrance of the building. As a WJN van approached the Zeidler building, it would honk its horn, an on-site WJN staff member would remove the cone from the right turn lane and the van would park for a short time while potential voters went inside to register and vote.

If the parking spots closest to the corner were full, WJN vans parked in regular spots on either side of Kilbourn Avenue. It is not clear if WJN employees were paying for this parking at regular meter rates.

In an interview with WUWM Public Radio, Milwaukee Election Commissioner Neil Albrecht said that in past elections, 30,000 people have cast their ballot during the early voting period.

In response to a MacIver telephone inquiry, Albrecht said in an email that more than 1,000 people voted early on Monday. Of the 1,059 votes cast, 178 of those were voters who registered on Monday and then voted. Tuesday’s number was not yet available at the time of this publication.

Many people may recognize the WJN name from the MacIver’s previous coverage of the many minimum wage protests in Wisconsin over the past year. Leaders of WJN claim the reason for these protests was to encourage elected officials to raise the minimum wage to at least $10.10 an hour – but preferably $15.

Instead, as MacIver revealed in a previous video, it turns out the real reason was to increase the Democratic voter turnout.

At a protest that was billed as a demonstration to call for a higher minimum wage last week in Madison, speakers quickly turned the conversation toward electing Mary Burke as governor. WJN handed out pro-Burke yard signs and nearly every speaker urged attendees to vote for Burke.

According to a flyer, WJN’s GOTV efforts will continue during the two-week period of early voting. A full schedule of the times and locations is available here.

The MacIver Institute will continue to investigate WJN’s efforts to determine how non-partisan the organization really is. Check back often for updates.