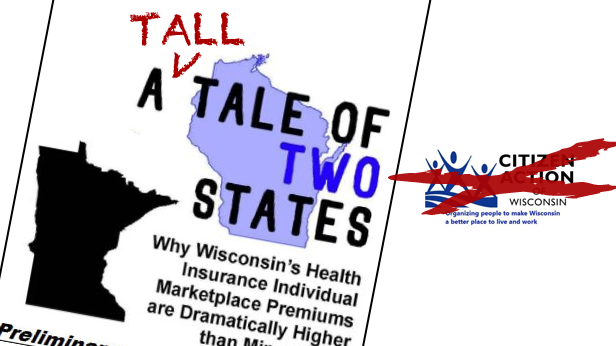 Once again, Citizen Action of Wisconsin (CAW) has published a politically motivated “report” that makes inaccurate assumptions about health care costs between Minnesota and Wisconsin and blames Gov. Scott Walker’s administration for higher premium rates in the Badger State.

While the CAW report is titled, “A Tale of Two States,” it is really just a tall tale that has no basis in fact.

A similar report was published last year by CAW, which the MacIver Institute swiftly refuted. The full analysis of that report is available here.

CAW’s “Preliminary 2015 Report Update” once again blames Wisconsin’s reforms to BadgerCare for higher health care costs in Wisconsin. Instead of basing this claim in fact, CAW just assumes that because premiums are higher in Wisconsin than in Minnesota, it must be Walker’s policies at fault.

Let’s look first to the data for Minnesota cited in the CAW report. While the amounts claimed seem to be similar to what is being advertised by MNSure – Minnesota’s statewide health insurance marketplace – CAW leaves out an important detail about our northwest neighbor’s exchange.

The company that insured about 60 percent of Obamacare enrollees in 2014 decided a month ago that it would no longer offer plans on the state-based exchange. PreferredOne decided to leave the exchange and only offer plans in the private market.

A spokesman for the health insurance provider said the cost to sign up enrollees on MNSure was “not administratively and financially sustainable.” PrefferedOne offered some of the cheapest plans in the exchange, which is why so many people flocked to the company.

Now people will have to decide if they want to continue to purchase insurance with PrefferedOne off the exchange (without any taxpayer-funded subsidy) or they will have to change insurance companies and find a new plan that is offered on the exchange. However, if one company felt the exchange was not “financially sustainable,” it is very possible that other companies will either hike their rates in coming years or they could leave the Affordable Care Act (ACA) marketplace, as well.

What CAW also neglects to mention in its report is the new cost of premiums for PrefferedOne in 2015. According to reports, the company said, “its individual market subscribers will see an average premium increase next year of 63 percent due to high claims costs.”

Not only is the MNSure exchange financially unsustainable, customers that choose to stay with PrefferedOne will likely experience quite a bit of sticker shock. Since the company insured more than half of the people of the exchange in 2014, their rates are far from irrelevant – even if CAW seems to think so.

“They’re going to get substantial rate increases,” she said.

While the Minnesota exchange can boast some of the lowest premium costs in the country right now, critics, and at least one insurance company, think their low premiums are not sustainable and will likely increase in the coming years.

Now, even if we assume that CAW’s data is accurate and telling of the whole picture – which as was pointed out, it is not – there is still no way to pin higher premium costs on Walker’s health care reforms in Wisconsin.

In fact, Wisconsin has historically had higher rates than Minnesota when it comes to health insurance premiums, according to Milwaukee-based HCTrends Editorial Director Dave Jensen, a health care policy expert.

Jensen points to the Medical Expenditure Panel Survey conducted by the federal government’s Agency for Healthcare Research and Quality, which shows Wisconsin’s premiums were higher than Minnesota in 2013 – before the Affordable Care Act went into effect.

The average Wisconsin family premium was about 12.4 percent higher than the average in Minnesota in 2013.

Another problem with the CAW study is how it compares premiums in most major Wisconsin cities to premiums in the Twin Cities. The Minneapolis-St. Paul area has some of the lowest rates in the state and has much different demographics than smaller Wisconsin cities. This is an invalid comparison on its face.

Actual Impact of Rate Review and the Medicaid Expansion

The CAW report blames Wisconsin’s reforms to BadgerCare as one reason for higher premiums on the health insurance exchange. HCTrends’ Jensen told the MacIver Institute that the Medicaid population is too small to cause a major shift in premiums.

“The potential number of people impacted by the expansion (those in the 100-138% FPL income level) is too small in relation to the total insured population to have an impact on overall premiums,” Jensen said.

If there was an impact, a MacIver Institute report shows that expanding Medicaid would actually increase costs for people on private insurance. Medicaid reimburses doctors at a much lower rate – about 49 percent – than private insurance when it comes to primary care. Therefore, hospitals and physicians have to make up the cost elsewhere, which would likely lead to higher premiums for those using private insurance from an employer or purchased on the exchange.

CAW also claims that Wisconsin does not have as robust of a rate review process as Minnesota, leading to higher rates. Once again, the report simply offers misleading information. According to Wisconsin’s Office of the Commissioner of Insurance (OCI), the federal government approves of the state’s rate review process.

“OCI is an effective rate review state under federal guidelines. That means that we remain the primary regulator of health insurance rates,” J.P. Wieske, spokesman for OCI, told MacIver in an email. “Good rate regulation ensures that insurer rates are neither excessive nor inadequate.”

“We are fortunate in Wisconsin that we have such a competitive market, and our approach reflects that,” he said. “The approach helps avoid some of the issues we’ve seen in other states with plans dropping out of the exchange and proposals for very high rate increases.”

Citizen Action’s report is just another attempt to damage Scott Walker politically. This thinly veiled policy piece does not add to the discussion of reforming health care policy in Wisconsin, but instead tries to find any reason – whether accurate or not – to put the governor in a bad light.

While CAW tries to blame Walker for high premium costs, there is no reliable information supporting its case. Wisconsin has historically had higher rates than Minnesota, but that may change in coming years as health insurance companies find out having health plans offered MNSure may not be “financially sustainable.”

Instead of offering true research or accurate analysis, CAW simply published a report of tall tales in the hopes of scoring political points.