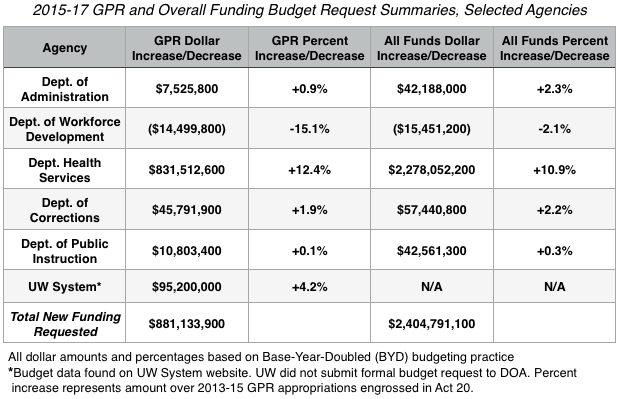 [Madison, Wisc…] Wisconsin’s biggest state agencies have asked for budget increases well into the millions of dollars as all formal budget requests from state departments were submitted early this week.

Gov. Scott Walker and the Department of Administration (DOA) had instructed state agencies to “assume there will be zero growth in overall GPR (General Purpose Revenue) appropriations in each fiscal year during the 2015-17 biennium, and specific program needs should be managed within this general constraint.” General Purpose Revenue comes from individual and corporate income taxes, sales taxes and various other minor taxes, meaning any increases in GPR spending are ultimately absorbed by the average Wisconsinite.

DOA also instructed departments to ask for no increases in Segregated Revenues (SEG), which typically come from the transportation fund, conservation and environmental funds, and the lottery fund.

Exceptions to the strict budget requirements were made only for K-12 school funding and “basic cost-to-continue” needs.

In his cover letter, Evers explains the extra money will go towards school safety and technology in Wisconsin’s schools. He also indicated that this budget request is only the first of two installments and that the second request will include details on school funding.

DHS is asking for upwards of $2.78 billion in extra funds, an 11 percent increase. Secretary Kitty Rhoades pointed to the growth of Medicaid costs as the primary driver of an $831 million requested increase in GPR.

“Health care costs continue to consume an ever larger share of the state budget, creating funding pressures for other state priorities,” explained Rhoades in her cover letter, “The projected increase for Medicaid for the 2015-17 biennium, $760 million GPR, is based on enrollment and service utilization trends over the next three years.”

The request for more dollars at Health Services comes despite recent efforts to control costs of the Medicaid program.

Total GPR appropriations for Medicaid in the 2013-15 budget were around $4.5 billion, meaning the agency’s $760 million request would be an increase of 17 percent.

Almost half of the overall funding request from DHS, $1.25 billion, will be covered by federal dollars to help with increasing medical costs.

The UW System’s initial budget request was approved by the Board of Regents in August and calls for $95.2 million in new GPR funding for its “Talent Development Initiative.” The money will be split up to focus on STEM initiatives, expanding course options, increasing internship opportunities and to “cover tuition increases” that have been frozen.

“I am proposing that our biennial budget request focus on the development of talent,” said UW System President Ray Cross in an August press release. “We have a talent gap in Wisconsin and it’s holding back our economy.”

The requested $95.2 million increase in GPR dollars represents a 4.3 percent increase over 2013-15’s GPR appropriations for the University System.

The Department of Corrections is requesting $45.8 million more in GPR as part of a $57.3 million requested increase in all funds. The 2.2 percent increase is described as “largely a cost to continue budget” intended to “support current operations” and “fund commitments that have already been made.”

Another agency that looks as if it is going with a “cost to continue” request is the Department of Administration. The DOA is asking for $7.5 million more in GPR, a 0.9% increase, and $42 million more overall, a 2.3 percent bump. Secretary Mike Huebsch described the request as a “standard budget adjustment.”

The Department of Workforce Development was one of a small number of agencies to ask for less money in the next biennium. The agency says it can take a cut of $14.5 million in GPR funding, a full 15 percent drop, and needs $15.5 million less overall, down 2 percent.

DWD Secretary Reggie Newson attributed the ability to cut GPR substantially to the fact that interest payments to the federal government for the Unemployment Insurance Trust Fund will be paid in full by the end of FY2015.

In total, the six agencies have requested over $881 million in additional GPR funding for the next state budget. If the costs to keep up with Medicaid are left out, total GPR increases come to $121 million.