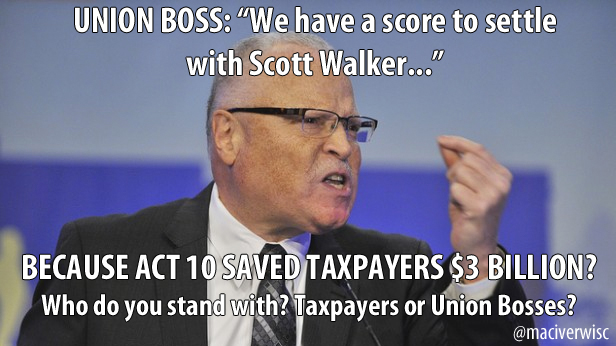 [Madison, Wisc…] The national head of the American Federation of State, County and Municipal Employees (AFSCME) made a bold statement earlier this week when he announced the union would target Wisconsin in the upcoming election because of the collective bargaining reforms known as Act 10.

Lee Saunders, AFSCME President, told the Washington Post that Gov. Scott Walker is the union’s number one target this year.

“We have a score to settle with Scott Walker,” the union boss said referencing Act 10. “He took collective bargaining away from us. He stole our voices, in a state where we were born.”

This is not the first time Big Labor has targeted Wisconsin. In 2012, unions and left-leaning organizations – many of which are funded by labor unions – poured more than $20 million into the state to defeat Walker and multiple state senators in that faced recall elections. The reason? Act 10.

In fact, the MacIver Institute broke down how much money each group spent and how it flowed between every organization. Check out MacIver’s Liberal Money Matrix below:

Money was not the only thing liberal groups threw at Wisconsin in 2012. They coordinated massive grassroots efforts including phone calls, door knocking and rallies. See how the organizations intertwined in MacIver’s Mobilization Matrix below: