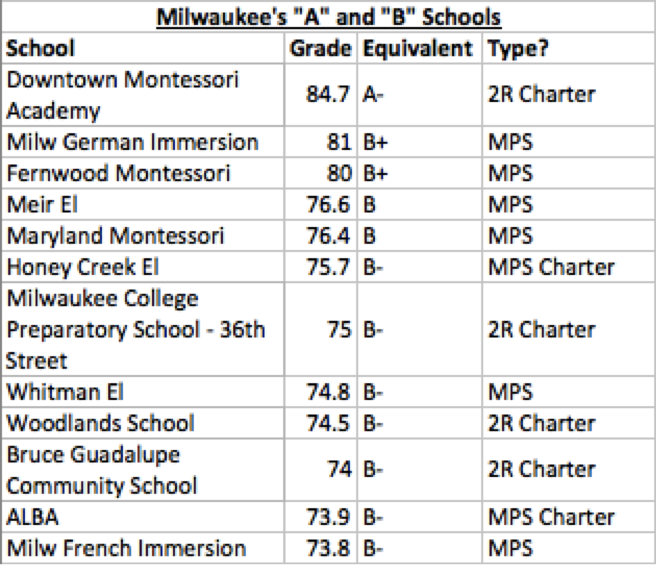 The city’s independent charter schools outperformed their peers, but Milwaukee’s traditional public schools earned a failing grade from the state

The 2013-14 Wisconsin School Report Cards have been released, and only one district in the state earned a “Fails to Meet Expectations” grade. That was Milwaukee, where 47 schools fell below the 53-point cutoff for a passing grade in the third year of the state’s measurements. More than one in three MPS schools failed to meet Wisconsin standards during the prior school year.

An absentee rate of more than 13 percent drove the city’s district report card score down to 51.1 out of a possible 100 points. As a whole, the city’s traditional public schools averaged a 55.19 on the state metric, a figure that trailed last year’s mark of 55.81. Milwaukee’s district-controlled public charter schools, which are approved by the district’s School Board, trailed their MPS peers for the first time since the School Report Cards were unveiled in 2012. These schools averaged just 54.81 points on the state metric.

The city’s independent 2R charter schools – schools that are non-instrumentality and approved by either the City of Milwaukee Common Council or the University of Wisconsin-Milwaukee, continued their reign as the highest-performing schools in the city by significantly out-scoring MPS-led public schools. You can see the overall and categorical scores for all three types of classrooms in the chart below.

This was the third year that data was reported for the state’s School Report Cards. These grades are based on student performance in grades 3-10 in four different categories. Those are: student achievement, student growth, closing gaps, and postsecondary readiness. Schools are also subject to deductions from their overall score if they fail to meet state benchmarks for attendance, test participation, and dropout rates.

While these independent 2R charters posted significant scoring advantages in all four categories that the state measures for its report cards, they also had lower concentrations of special needs students than their peer institutions. These charters also had fewer students from economically disadvantaged families (though the percentages for all school types ranged between 80 and 85 percent) or families that did not speak English as their first language. Students from those backgrounds typically have lower achievement scores when it comes to standardized tests like those from which the School Report Cards glean their data.

The only school in the city that was given the equivalent of an “A” grade – a score of 83 or higher – came from Milwaukee’s independent 2R charters. The Downtown Montessori Academy earned a score of 84.7 for 2013-14. That number was 3.7 points higher than the next closest school, the Milwaukee German Immersion School.

While the German Immersion School’s 2014 score was a bright spot for traditional MPS schools, the school’s performance was far from a common occurrence in the district. Only 4.5 percent of the district’s schools earned “A” or “B” grades. That number trailed far behind the concentration of quality schools amongst the city’s instrumentality and independent 2R charter schools.

While the city’s independent 2R charters could claim the highest-performing school in the district, they also held the ignominious distinction of operating the lowest-performing institution as well. North Point Lighthouse Charter was one of four 2R schools to earn failing grades on the state’s report card.

These concentrations of high-performing schools increased for both traditional public schools and independent 2R charters in the past year. That figure remained the same amongst instrumentality charter institutions. Here’s how those percentages have shifted over the past two years.

Traditional MPS schools still had a significant number of institutions that rated at a “D” or worse, but they kept their overall concentration of underperformers static despite the addition of 17 schools that hadn’t been graded in 2012-13. Amongst the city’s instrumentality charters, two schools that earned “C” grades or higher in 2012-13 fell into the “D” zone in 2013-14. 2R charter schools recorded their highest number of “B or better” institutions while also reducing their number of “D or worse” schools by 40 percent.

These report card scores continue a trend that suggests that Milwaukee’s 2R charters are the top performers in Wisconsin’s largest city. Their scores have remained relatively stable, despite a small decrease, in the two years following the metric’s pilot run in 2011-2012. The fluctuation in the city’s scores immediately following that year can be attributed to changes made in the report cards after its first-year of operation.

2013-14 brought scoring declines across all three public school sectors in Milwaukee, but those negative effects hit the city’s instrumentality charters the hardest. However, the state has just two years of report card data that use the current formula for determining a school’s value to parents and students. As such, it is difficult to interpret whether or not these slight drops will be indicative of a larger trend or if they will be blips on the radar. The small gains seen throughout the rest of the state in 2013-14 suggest that a rebound may be on the horizon for the district’s schools.

Milwaukee is an outlier in Wisconsin’s public education system. This year’s School Report Cards shows that no other district in the state matched the city’s level of failure in 2013-14. However, there are still several diamonds in that rough, including 12 schools that earned the equivalent of a “B” grade or better. In general, these high-performing schools were more likely to be Milwaukee’s independent 2R charters. Those schools were the strongest in the city for the third-straight year, a ranking that performance on the WSAS supports.

That’s a strong argument for public school choice in a city where 81 percent of families picked the classrooms their children would attend last fall. Families throughout Wisconsin are turning to charter school options more than ever before. These School Report Cards suggest that some of these schools could be the model for replication in the future, while others may be at a tipping point when it comes to either turning around their performance or shutting down altogether.