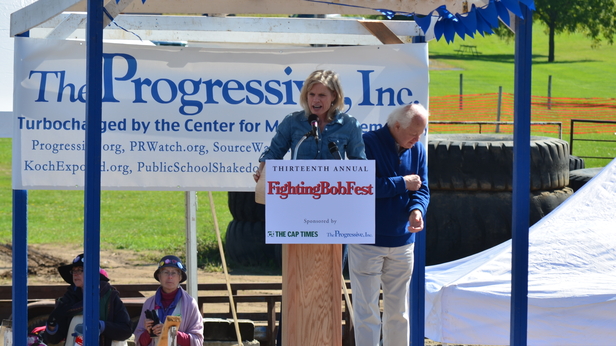 [Baraboo, Wisc…] Mary Burke once again ignored questions about her position on Act 10 and whether she would repeal the law on Saturday.

The Democratic candidate for governor spoke to a crowd of a few hundred people in Baraboo over the weekend at Fighting Bob Fest, an annual rally hosted by The Progressive Magazine and the Cap Times with a host of liberal and progressive speakers.

Burke spoke to the crowd for about ten minutes with a central theme that she would be a governor that would, “put the people of Wisconsin ahead of the special interests.”

Unfortunately for Burke, union boss John Matthews was standing behind her in solidarity during her entire speech and even introduced her with a ringing endorsement. Matthews is the Executive Director of Madison Teachers, Inc. (MTI) – the Madison Metropolitan School District’s local teachers’ union.

MTI was the main plaintiff in the lawsuit over Gov. Scott Walker’s collective bargaining reforms. The state Supreme Court ruled against MTI this summer and upheld Act 10 in its entirety.

Not only did MTI file the lawsuit over Act 10, the union and Matthews were central organizers for teachers staging a sick-out during the 2011 protests that. The MacIver Institute discovered Matthews even lied about the union’s involvement in the sick-out when the district requested teachers come back to work.

After her speech, the MacIver Institute tried to ask Burke about her position on Act 10. When asked if she would repeal the collective bargaining law, a campaign staffer promptly got in the way and Burke quickly walked in the other direction.

The MacIver Institute will continue to ask Burke how she would handle Act 10 as governor – one of the most important issues facing Wisconsin taxpayers – and if she did to repeal it, how she would make up the $3 billion in savings.

Check back this week for more updates from Fighting Bob Fest including video of multiple speakers.