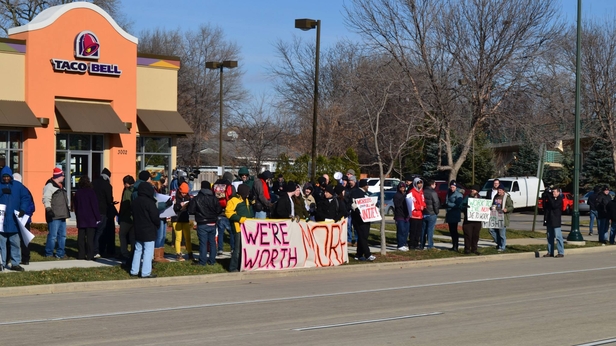 A handful of fast-food “protesters” turned out on September 4th in Milwaukee, Madison and a few other Wisconsin cities – and across the country – demanding wage increases and the right to organize as a union. Some demonstrators willingly broke the law, obstructed traffic and were arrested, including Milwaukee’s own U.S. Rep. Gwen Moore.

While organizers and some in the media would have you believe the movement is an organic development, Diana Furchtgott-Roth of Economics 21 insists that it is all a ploy to benefit unions, specifically the powerful Service Employees International Union (SEIU).

In her column entitled “Fast-food Worker Strikes Aren’t What They Appear To Be,” Furchtgott-Roth explains that the SEIU is using “worker centers” like Fast Food Forward to do the “dirty work” of organizing worker protests. Milwaukee’s Wisconsin Jobs Now, also connected to the SEIU, is a comparable worker center that is active in directing protests throughout Wisconsin. All of this is being done despite declining participation in private sector unions and numerous studies that show increases in the minimum wage will cost jobs.

Furchtgott-Roth gives further evidence by pointing to a case in the military in which the federal Department of Labor mandated pay and benefit increases for fast-food establishments on military bases. As a result of the forced inflation of wages, McDonalds closed three stores on Navy bases and one more at a Marine base. A Navy official also wrote a letter to the Department of Labor warning that hundreds of restaurants would be closed and thousands of jobs lost if the wage rules stayed. The Administration has since rescinded the wage requirement after hearing about the damage done.

Read the full column at E21 by clicking here.