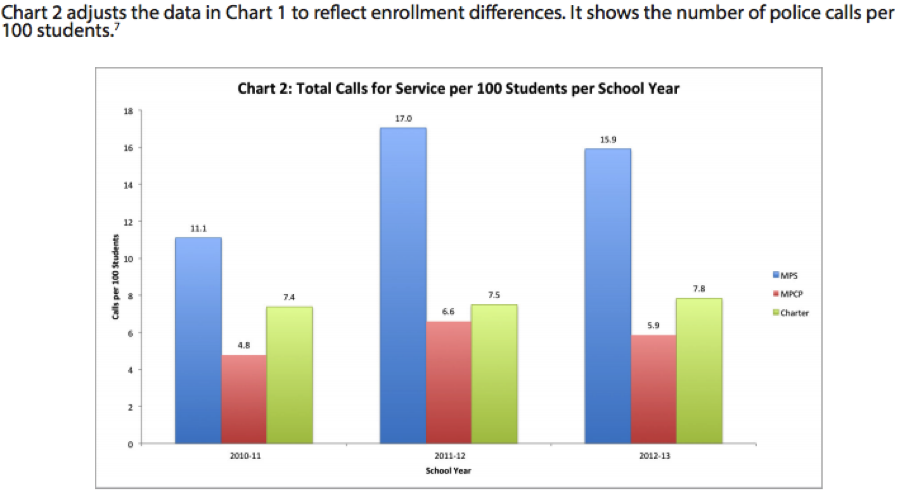 Teachers and administrators in Milwaukee Public Schools are more than twice as likely to have to call the police in their classrooms than staff in the city’s voucher and independent charter schools.

That’s the takeaway from a study released Tuesday by School Choice Wisconsin. The Milwaukee-based group looked at the raw numbers behind which schools made service calls to the city’s law enforcement between 2010 and 2013 in order to determine which type of institution – traditional public, voucher, or independent 2R charter – needed police assistance the most. MPS’s neighborhood public schools won that ignominious honor by a significant margin:

Those calls led to 261 juvenile arrests in MPS schools between 2010 and 2013. That figure was just seven in Milwaukee’s voucher schools and three in the city’s independent charters. While MPS had a student population that was 2.7 times larger than the Milwaukee Parental Choice Program (MPCP), their arrest rate was 37 times larger than that for students in a voucher school. In fact, were more than 13.7 times more likely to be arrested at an MPS school than an MPCP one.

Over that three-year span, MPS schools were also more than four-and-a-half times more likely to call 911 to report a violent offense:

School Choice Wisconsin’s data shows that Milwaukee’s public schools are significantly more likely to require police assistance than their counterparts in the MPCP or amongst 2R charter schools. This suggests that discipline problems are a much bigger issue in the city’s traditional schools than those in the voucher or charter programs. That’s bad news for students and bad news for the teachers who are trying to engage with these pupils. Chronic disruptions are something that can have a seriously negative effect on student growth, and this study shows that this problem has become a major drain in MPS.