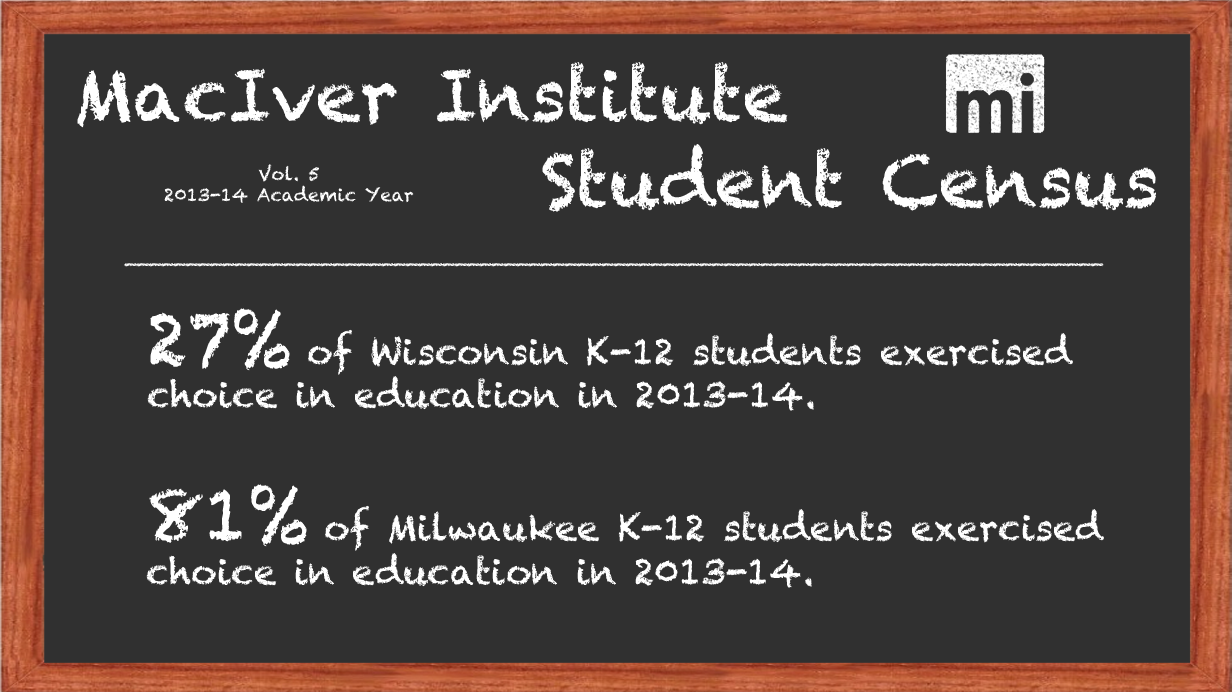 The MacIver Institute’s 2014 Wisconsin Student Census records the school choices of every K-12 student in the state. That ranges from students that attend their local traditional public schools to private school students, homeschooled students, students in charter institutions, and pupils that use open enrollment to attend a traditional public school that lies outside of their home district. In all, there were 1,011,939 K-12 students in the state for the 2013-14 school year. 273,194 of those students – 27 percent – chose their classrooms rather than allowing geographic limits dictate which school they attended.

The number and concentration of students attending charter schools or using open enrollment to attend a public school rose, but that was not enough to offset the population decreases in the state’s private schools or amongst the declining number of pupils who used Three-Choice Enrollment and Chapter 220 transfers in Milwaukee and beyond. This led to a slightly lower concentration (.03%) of students who exercised school choice in 2013-14 than did in 2012-13.

The majority of students chose the state’s local public schools, leading to a small increase in their share of the state’s pupil count. However, since overall enrollment dropped by more than 800 students these public schools actually enrolled fewer children in 2013-14 than they did in the previous year. Wisconsin’s private schools educated the second-most students in the state, but suffered an overall loss of more than 3,000 students last year. That drop came despite the presence of a new statewide school choice program – the Parental Choice Program – that enrolled more than 500 pupils in a cap-limited voucher program.

The state’s virtual schools and open enrollment programs enjoyed the most robust growth in the past year, gaining more than 10 percent of their previous populations through new enrollees. Two programs that are primarily limited to Milwaukee, intra-district Chapter 220 transfers and Three-Choice Enrollment saw their participation rates decline at significant rates. However, it should be noted that the 2012-13 figure for Three Choice Enrollment was an estimate and not the exact figure, so the percentage of students lost may not be accurate.

Charter school enrollment continued its steady growth in the Badger State, cresting the 40,000-student plateau for the first time. Homeschooling saw a modest resurgence after participation numbers dropped by over 1,200 students between the 2011-2012 and 2012-2013 school years.

This growth amongst open enrollment and charter schools and decline in private school enrollment is the continuation of a trend that dates back to the first MacIver Institute Student Census from 2010.

These data show significant increases in participation for the state’s public school choice programs and an overall decline in the total amount of students remaining in their neighborhood public schools. Additionally, private school enrollment has dropped by nearly 11,000 students in the past four years despite the expansion of the Milwaukee Parental Choice Program (MPCP) and the creation of two new voucher programs (in Racine and statewide) during that span.

If we go back even further, to the 2001-02 school year, the rise of open enrollment and public school choice options becomes even clearer. This influx of students came at the expense of traditional public schools, private schools, and homeschooling.

The chart above is abbreviated due to a lack of inter and intra-district transfers in 2001-02, as well as a lack of available data for Three Choice Enrollment in that same year. Despite that, the statewide trend is clear. Student counts in terms of both open enrollment transfers and charter school attendance have all risen significantly despite a smaller total number of K-12 students in the state. Wisconsin’s families have chosen these schools over the past decade-plus and made these options a legitimate presence in the public school arena.

A look at enrollment as a function of the total student body supports this claim. Neighborhood public schools and private schools have both been losing their share of the student population while families reach out to public choice programs in their place. Though charter schools claimed just fewer than four percent of the state’s student population, their share of the overall student body has risen by more than 400 percent since 2001-02. The open enrollment option has increased its student share by more than 700 percent in that span.

Milwaukee is the birthplace of America’s first modern school choice program and it’s no surprise that the district with the most choice options is also the district where students are most likely to attend a school other than their neighborhood public school. 81 percent of students in the city attended a school of their choosing in 2013-14. This was an decrease of 0.28 percent from the previous year.

More students attended private schools than their neighborhood public schools thanks in part to the MPCP. That voucher program enrolled 24,915 of the city’s 30,852 private school pupils. The district also had high concentrations of students that chose public choice options. Many families chose open enrollment or Chapter 220 transfers to find the school that fit them best outside of their geographic limits.

Additionally, nearly 8,300 pupils utilized Three Choice Enrollment, a Milwaukee-specific program that allows families to choose the top three MPS programs that they would like their child to attend. The district then matches these students to their schools as best they can, often with near-100% success rates.

Milwaukee actually saw both traditional public school and private school enrollment numbers rise in the past year. However, that slow growth trailed behind big population increases for charter schools, virtual charter schools, and open enrollment programs. These gains came at the expense of programs like Chapter 220 transfers, Three Choice Enrollment, and homeschooling.

Many of those numbers run counter to what we’ve seen over the last four years as a whole. Since 2009-10, traditional public school enrollment has dropped by 18 percent while homeschooling, Three Choice Enrollment, and private schools have all seen moderate-to-significant increases. The charter school population rose by more than 3,000 students in the city over this same span.

If we track enrollment all the way back to 2001-02, we need a major decline in traditional public school enrollment – though this does not include Three Choice Enrollment, which would have made up a reasonable portion of that student body. As a result, it’s difficult to know how accurate the reported population is for these schools. Milwaukee also bucks the statewide trend when it comes to private school populations once again. This may be the result of expansions to the Milwaukee Parental Choice Program (MPCP), which has no enrollment cap and a higher income limit than the statewide program.

Much of the attrition from the city’s neighborhood public schools came as the result of more students using open enrollment, Chapter 220 transfers, and charter school options. This growth is also apparent when the district’s student population is broken down by concentration:

In 2009-10 and 2013-14 the total concentration of students does not add up to 100 percent because of the presence of Three Choice Enrollment. In 12 years, Milwaukee has seen charter schools rise from an educational afterthought to a choice that’s on par with parents settling in with their local neighborhood public schools. Milwaukee’s charters have seen their share of students rise by over 1,500 percent in that span. Chapter 220 and open enrollment programs in the city also saw tremendous growth in terms of their concentration of Milwaukee’s student population.

Wisconsin’s traditional public schools earned a small increase in their share of the K-12 student population this past year. However, that growth didn’t match the continuing trend of parents opting for public school choice options like open enrollment and charter schools. Those two sectors saw their populations increase for the fourth straight year.

Conversely, private schools saw a negative trend continue in 2013-14. These institutions have lost nearly 11,000 students since 2010. Private schools in Milwaukee did their best to reverse those losses by increasing their overall enrollment for the fifth straight year. Those numbers suggest that the presence of the state’s largest private school choice program, the MPCP, has had a significant effect in giving families greater access to these institutions.

While 27 percent of families exercised some form of school choice in Wisconsin, that number tripled in the state’s largest district. Milwaukee has always been the leader when it comes to educational options in the Badger State. This year’s 81 percent participation rate is high, but it also represents a second-straight decrease in the city’s annual choice population. Milwaukee’s families have yet to exceed the 81.54 percent high water mark that came back in 2011-12.

These data show that Wisconsin families are utilizing the options that they are given when it comes to educating their children, especially in Milwaukee. The growth shown in open enrollment and charter school choices is a strong indicator of the support and demand these programs have developed in recent years. This, coupled with the continuing decline of private school enrollment throughout the state outside of Milwaukee, may suggest that parents are more comfortable looking for free or low-cost public options rather than paying a premium to find the K-12 classroom that best fits their child.