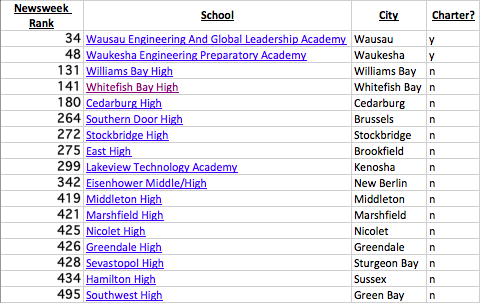 [New York, NY] Newsweek recently released their annual list of the top 500 public high schools in America. Wisconsin was well represented in that index, claiming 17 of the best institutions in the country.

Two charter schools set the tone by being the only Wisconsin high schools to crack the top 50. The Wausau Engineering and Global Leadership Academy was ranked highest amongst Badger State schools at 34. The Waukesha Engineering Preparatory Academy was not far behind at 48. No other Wisconsin high schools ranked inside the top 125, but traditional public schools made up the state’s other 15 entries on Newsweek’s listing.

The list recognized some of the state’s top performers when it comes to innovation and preparing high school students for the next steps in their lives. However, schools in some of the state’s largest districts – Milwaukee, Racine, and Madison – failed to make the cut. These rankings, along with the state’s School Report Card metrics, should provide parents, teachers, and administrators with some strong examples of what to replicate in Wisconsin’s high schools.