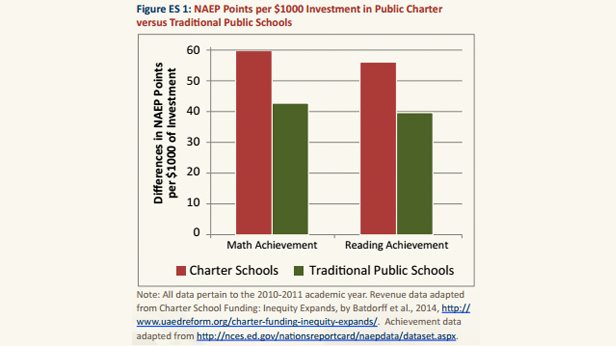 America’s charter schools are giving the country its best return on investment when it comes to educating students in a public K-12 classroom.

That’s the latest discovery from the School Choice Demonstration Project (SCDP), a cadre of researchers based primarily out of the University of Arkansas. The SCDP is best known in Wisconsin for their empirical research comparing student growth in Milwaukee’s public and voucher schools. With their latest study, they’ve expanded to cover another issue that plays a big role in the Badger State’s K-12 education programs – charter schools.

The SCDP study weighed student performance versus funding levels across the two types of public schools — the traditional public school and a charter school. Their research showed that charter schools performed better on National Assessment of Educational Progress (NAEP) testing – also known as The Nation’s Report Card – than their traditional school peers when it came to average scores in math and reading weighed against the amount of funding each school received.

While overall results showed uneven performances from charter schools from state to state, one trait remained constant – charter schools produced more student gains per dollar of funding than regular public schools. In fact, charter schools have a 40 percent productivity advantage in math and a 41 percent productivity advantage in reading. These overall advantages remained true in all 21 states and the District of Columbia, but swung considerably from state to state. While gains were small in places like Hawaii (7 percent), D.C. saw advantages of more than 100 percent in reading and math for their charter school students.

Wisconsin fell in the middle of this range but still saw a significantly stronger return on investment in their charter schools compared to traditional public institutions.

While the state’s charter schools fell behind the Wisconsin average in raw NAEP scores, they were also funded at approximately 59 percent of their traditional school peers. As a result, their return on investment – the achievement per $1000 of funding – is significantly higher than the statewide average. Those differentials were the fourth highest of the observed states in the study, placing Wisconsin behind Oregon, Idaho, and Florida in the metric.

The study also showed that the positive impact of being in a charter school grew with the amount of time a student remained in that institution.