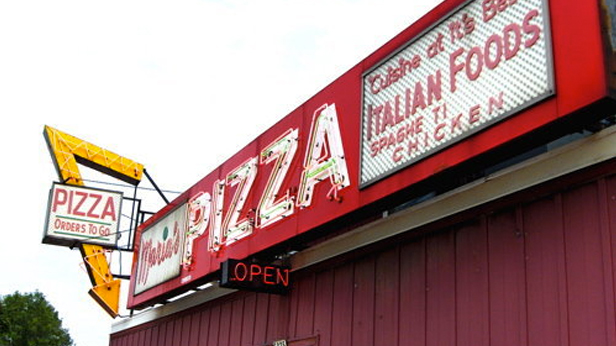 Maria’s Pizzaria is not the likely location for a political fight. It’s a small restaurant on Milwaukee’s south side that hasn’t changed much in the over fifty years since its founding. The décor mostly consists of different cheap depictions of Jesus. Here and there are scattered a few pictures of the family. There is not a political sign to be found. The most prominent signs are those that say, “cash only.”

Still, politics is what is contributing to a recent uptick in their business. On Tuesday night when my family dined there, the longtime south side establishment had a line out the door at times. Every table was filled the entire time we were there. Carry out orders were exiting in a steady stream and the phone continued to ring the whole time we were there.

I’ll grant that the pizza is good and relatively inexpensive. But it was not the large rectangular pizzas with the thin crust and lots of toppings that was attracting new business. Although you could not tell it Tuesday night, Maria’s Pizzaria is the target of a boycott.

According to the restaurant’s official history, Maria’s Pizzaria first opened its doors in 1957. The first owner, Maria, passed the restaurant along to her children, and now a third generation is involved as well.

One of the owners put up a yard sign in support of Governor Scott Walker at her home. Not at the pizzeria, but at her home. A member of a local union, Gerry Miller, noticed the sign and knew who owned the house.

Miller posted on Facebook, “I thought I would share this photo and I hope it goes viral. You see the woman who owns and lives in this home owns Maria’s Pizza. She lives up the block from me. The fact she supports a Governor who has hurt my family and many people I am close too [sic] and displays this. I will never eat another Maria’s Pizza Again. ihope this is shared! Done Done Done!!!!!”

However, this owner is only one of the restaurants owners. Another owner is a Democrat, while the others are non-political. The pizzeria owner that put up the sign for Walker did not bring her politics into the restaurant. It’s not like Penzey’s Spices who put politics directly into their catalogs.

None of that mattered to those calling for a boycott. It was posted and reposted, and even reposted on the Facebook page of Maria’s. The boycott even has the support of a radical leftwing blogger who wrote, “Apparently, the owners of Maria’s Pizzaria [sic] only support these freedoms for themselves and the rest of us can just shove a pepperoni up our backsides.”

(Someone should explain to leftwing bloggers the meaning of sic and that it can’t be applied to a name.)

Boycotts are nothing new for Wisconsin’s leftwing since the election of Scott Walker as governor. Shortly after the introduction of Act 10, Rupena’s Fine Foods, less than 10 minutes from Maria’s, was targeted for a boycott because they refused to display the Blue Fist of the protests.

They weren’t alone. Businesses in Union Grove received a letter from AFSCME Council 24 saying that if they didn’t demonstrate that they were for the state employee unions by displaying the Blue Fist, they would suffer economically. “Failure to do so will leave us no choice but do a public boycott of your business. And sorry, neutral means ‘no’ to those who work for the largest employer in the area and are union members.”

The Blue Fist symbol threatened to become a modern version of the New Deal Era’s Blue Eagle of the National Recovery Agency. Businesses that did not display the Fascist-like symbol were threatened with boycotts. Schoolchildren were even made to pledge, “I will buy only where the Blue Eagle flies,” an eerie precedent for Madison teachers marching their students to the Blue Fist protests at the Capitol.

In Union Grove, the unions backed down when there was a backlash in support of the businesses that refused to give in to the union demands. Hardly a sign in support of the unions could be seen in the shop windows while the negative publicity caused AFSCME Executive Director Marty Beil to blame the boycott threat on, “some unfortunate overzealousness in the field.”

Even a charitable event, Bratfest in Madison, is still the target of boycotts because the sponsor, Johnsonville Brats, was perceived as a backer of Walker.

In response, conservatives have launched “buycott campaigns” to support those businesses that have been the target of leftwing boycotts.

Conservatives created lists on the web to encourage other conservatives and even those that are non-political to support those businesses that they see as unfairly targeted. Some businesses like Rupena’s and Maria’s Pizzaria even received extra publicity on Milwaukee talk radio because of the boycott threats.

On the Tuesday night my family dined at Maria’s Pizzaria, it was clear they were the beneficiaries of a “buycott.” The couple sitting behind me said they often drove past Maria’s but the controversy made them want to give the pizza a try. At the table next to them, a family from Waukesha was giving Maria’s pizza a try because they heard about the controversy on the radio. The waitress told another table how there was a crowd at the door waiting for the place to open at 4:00 PM, and that the restaurant was definitely busier since the controversy began.

My wife, the Lovely Doreen, said that when she was growing up on Milwaukee’s south side, picking up a pizza at Maria’s with her dad was a real treat. To her and many from that part of the city, Maria’s is an institution like Serb Hall or Leon’s Custard. She was glad that the boycott seemed to be failing as so many people rallied to the pizza restaurant’s defense.

I think Doreen was also glad that the boycott gave her an excuse to introduce her family to the pizza she grew up with. Thanks to the threatened boycott, the kids and I weren’t the only first-timers. Judging from the reactions on Maria’s Facebook page, we won’t be the only ones planning a return visit, too.