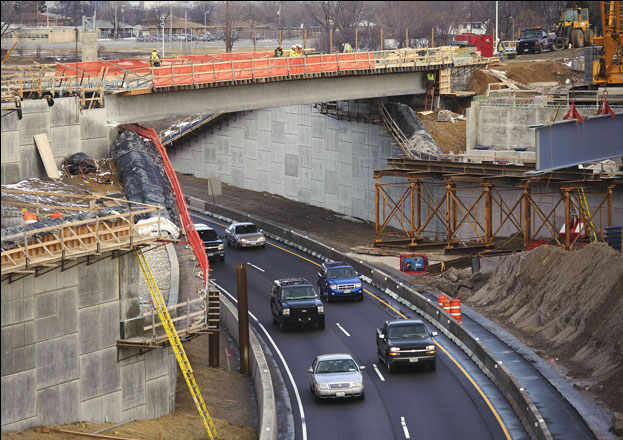 [Washington, D.C.] The U.S. Senate passed the original House version of a transportation patch-up bill on Friday that keeps federal money flowing to state and local projects through May of 2015. The $10.8 billion package passed 81-13 and includes the controversial “pension smoothing” gimmick that Senators had attempted to take out earlier last week.

The House rejected the Senate rewrite on Thursday, however, with a 272-150 vote that put pressure back on the Senate to get a deal done by the end of last week. The Senate folded within just a few hours to ultimately pass the House version Thursday afternoon.

Officials from the U.S. DOT had warned that project payments would be cut by as much as 28 percent if a fix was not passed by Friday.

The White House has already said it will approve the House version, but would have preferred their four-year, $302 billion GROW AMERICA Act as a long-term solution.

Wisconsin Senators remained split on the issue, with Tammy Baldwin voting yes and Ron Johnson one of thirteen to vote no. Johnson had a different solution in mind when he signed on as a co-sponsor to Senator Mike Lee’s (R-UT) Transportation Empowerment Act (TEA). The TEA bill’s solution to the transportation debate is to hand off the majority of infrastructure responsibilities to states and localities while reducing the federal gas tax to 3.7 cents per gallon.

The House plan to keep the Highway Trust Fund solvent for ten more months will require a portion of the funding to come from pension smoothing, an unpopular gimmick previously derided by members of both parties

Critics of the idea are concerned about the potential bankruptcy of the Pension Benefit Guaranty Corporation (PBGC), a government agency. The PBGC functions as an insurance of sorts for private companies who offer pension benefits. If a company goes into bankruptcy, the PBGC can step in to cover existing and future retiree benefits. The agency is supposed to be funded from premiums paid by those companies who use the guarantee, but, the PBGC itself reported an increased deficit of $36 billion.

As with any budget shortfall at a government agency, taxpayers are ultimately responsible for the cost of spending deficits. Gimmicks like pension smoothing only make the long-term PBGC situation worse by increasing the likelihood of a taxpayer bailout in the future.

The Heritage Foundation, a national think-tank, has reported extensively on the issue of pension smoothing, warning of future risks that are simply not worth the immediate benefits.

Heritage’s Romina Boccia, an expert in federal spending and budgetary policy, feels that pension smoothing has no place in any policy discussion. She slammed the trick in a recent article about an Unemployment Insurance bill introduced earlier this year.

“The proposal to “smooth” pension contributions would merely shift tax revenue from the future into the present while destabilizing pensions even further and increasing the risks of a taxpayer pension bailout,” wrote Boccia

Similarly, The Committee for a Responsible Federal Budget has commented about the problems of pension smoothing. While pension smoothing in the House transportation bill adds $4 billion in revenue over the next ten years, yearly losses in the billions would continue after 2024, exacerbating the fiscal woes of the PBGC.