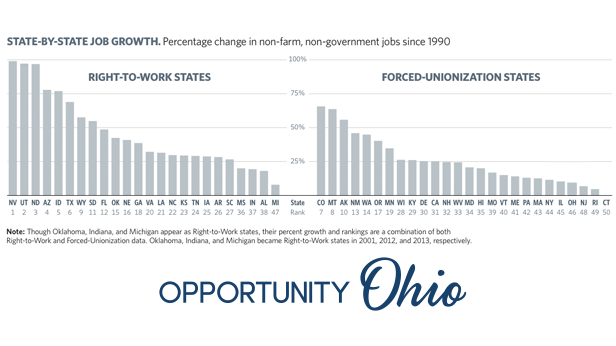 [Madison, Wisc…] Employment growth since 1990 has been dominated by states that are right-to-work and have low income taxes according to a new report from non-partisan Opportunity Ohio.

Using statistics from the U.S. Department of Labor, Bureau of Labor Statistics, and the non-partisan Tax Foundation, the report measures change in employment from 1990 to today.

By contrast, sixteen of the bottom twenty are forced unionization states, and eleven have income tax rates above the national average.

Wisconsin sits in the bottom half at twenty-seventh in employment growth since 1990.

While recent cuts in the tax rate and Act 10’s collective bargaining reforms have set the Badger State in a good direction, forced unionization and higher than average tax rates remain the law of the land and could contribute to slower economic growth.

Check out the full Opportunity Ohio report by clicking here.