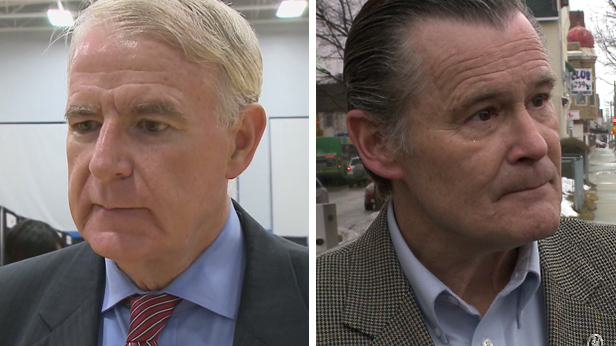 Why now? Why is Milwaukee Mayor Tom Barrett seeing challengers now and not during any of his previous runs for re-election?

Alderman Bob Donovan declared his candidacy well in advance of the 2016 mayoral election but there’s a strong possibility he will not be Barrett’s only challenger. Milwaukee County Sheriff David Clarke is also considering a run while Alderman Joe Davis has created an exploratory committee. As these things go, more candidates may jump in if they think Barrett is vulnerable.

It would certainly be unusual for Barrett to lose to a potential challenger. His predecessor John Norquist only left office after fifteen years because of a scandal. He resigned rather than face the voters. Prior to Norquist, Henry Maier served for 28 years. Before that, Frank Zeidler served for 12 years.

You would have to go back to 1940 for a sitting mayor in Milwaukee to be defeated on Election Day. Daniel Hoan lost to Carl Zeidler after Hoan served 24 years as mayor.

Barrett is in his tenth year. Since defeating acting-mayor Marvin Pratt in 2004 Barrett only had nominal opposition in 2008 and 2012. But 2016 could be a more competitive election.

When asked by the MacIver News Service why he is running, Donovan said, “I am disappointed by what’s happening in Milwaukee. I see a stagnation. For far too long, a lot of areas that are of grave concern to me that, for whatever reason, have not been addressed adequately. Areas like public safety, our schools, MPS, our infrastructure, our roads, many of the problems of people, the average citizen in Milwaukee deals with on a daily basis.”

Public safety is a likely issue of the next mayoral campaign. Gun violence is an almost nightly occurrence in Milwaukee, and the number of child victims has raised the visibility of the issue in the media.

While the number of homicides last year, 105, is certainly down from 2005’s total of 121, it was still higher than the 91 homicides in 2012. The trend is getting worse with 48 homicides by the beginning of August with the worst two months still to come (if last year’s trend continues).

The Milwaukee Journal Sentinel reported, “In the first half of 2014, a total of 261 people were wounded by gunfire in Milwaukee — a 20% increase compared with the same time last year.”

The response by the mayor and Flynn has been ineffectual so far. Barrett created an illegal gun hotline that received 45 calls in the first month but did not provide any substantive leads to law enforcement.

Barrett and Flynn called on Governor Scott Walker and the legislature to enact tougher penalties for felons with guns. However, an analysis of gun violence incidents by Media Trackers revealed that the problem in Milwaukee County is less about the penalty imposed and more about the unwillingness by the District Attorney’s office to adequately charge criminals.

The lack of progress in improving education continues to be a festering problem for city residents. The four-year graduation rate for Milwaukee Public Schools high school students is just 60.6%. Meanwhile MPS and the liberal power structure in Milwaukee continues to play a shell game to prevent empty buildings from being sold to private schools like St. Marcus Lutheran School.

In addition, liberals sent a message they care more about appeasing the teachers union when they backed Mandela Barnes over Jason Fields in 2012, part of a general purge of moderate Milwaukee Democrats.

Even the roads are causing Milwaukee residents a headache, or at least a backache. A Washington DC transportation research group, TRIP, found that Milwaukee has the eighth worst roads of the major American cities studied. TRIP claims 48% of Milwaukee’s major roads are in poor condition costing Milwaukee drivers an additional $700 in annual operating costs for their vehicles. This is in addition to the $20 “wheel tax” residents have to pay when they register their vehicles that is supposed to go to fixing the roads.

Meanwhile, Barrett continues to push for a streetcar system that will run along existing bus lines in a circle downtown. The streetcar is expected to cost $54.9 million in federal tax money and $9.7 million from local taxpayers. The annual operating cost would be $2.65 million for local taxpayers. These estimates do not include the likely cost overruns nor do they include the costs associated with utility infrastructure location. The priorities of Milwaukee’s transportation spending appear to be misplaced.

In light of those problems, Milwaukeeans may be feeling they’re not getting the level of government services they’re paying for. According to an analysis by USA Today, of the largest cities in each state Milwaukee has the 3rd highest combined tax burden. Tax rates and fees continue to climb in Milwaukee, seemingly only restrained by the legislature in Madison.

So we can see why Milwaukee politicians are willing to run against the historical trend in Milwaukee to try to unseat Barrett. Clearly, the challenge is too tempting for some to pass up given the city’s problems.

The other interesting question is how interested is Barrett in being mayor? When Barrett lost the Democratic gubernatorial primary against Jim Doyle 2002, the election as mayor was largely seen as a consolation prize. Barrett has for governor two more times, in 2010 and 2012. Potential challengers may be wondering just how much political will there is in Barrett to hold onto the job of mayor, and they may test him to find out.