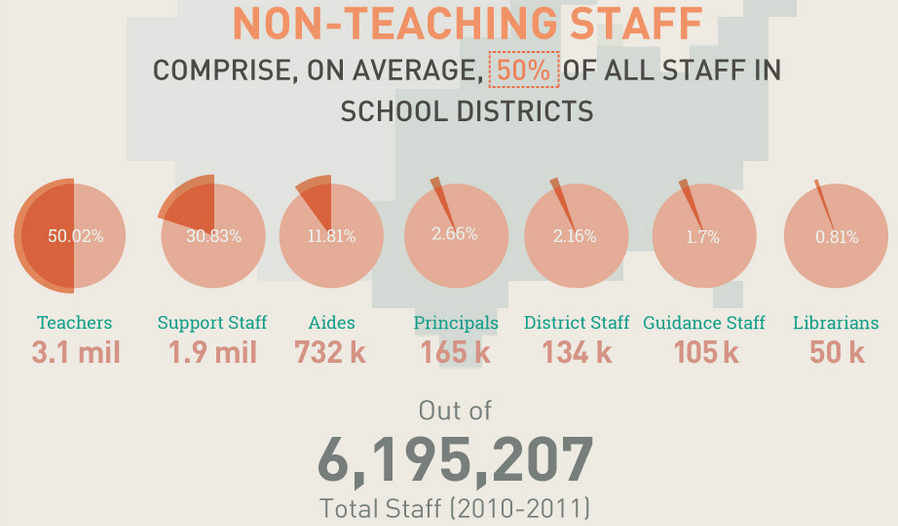 In 2010, teachers made up just 50 percent of America’s public school employees, leaving districts with just as many employees outside of the classroom as inside it. That figure continued a trend that has seen the country’s classroom shift towards non-teaching positions over the past 60 years.

According to the Fordham Institute, school staffing has increased by nearly 400 percent since 1950, adding non-teaching personnel to districts across the country. As a result, the balance of the teacher to staff ratio in America’s schools has shifted from more than two to one in 1950 to three to two in 1970 and now down to one to one in 2010.

That’s an increase that has America ranked second amongst developed countries when it comes to spending for non-teaching staff. The country trails only Denmark in this metric.

A look at student and staffing growth in the United States between 1970 and 2010 shows the reason for this:

Even when student populations were declining, American schools moved towards a significant increase in non-teaching staff. While the amount of teachers these schools employed increased by 53.7 percent, the amount of aides, support staff, and other staff members rose by 130.3 percent. The concentration of teaching aides jumped from two percent of all staff to just fewer than 12 percent over this same span.

While the staffing surge created more K-12 jobs for all parties, it meant big gains for employees who were not licensed teaching staff. In 2010, that meant that the United States was spending 26.7 percent of its non-capital educational funding on support staff. This trailed only Denmark amongst Organization for Economic Cooperation and Development (OECD) countries and was more than double the concentration of staff spending in nations like Finland, South Korea, and Austria. The OECD average was 15.5 percent.

As a state, Wisconsin had a below-average concentration of non-teaching staff to students. Their ratio of 53 staffers for every 1,000 students was the 10th-lowest in the country and well below the nationwide average of 67. This number also belied an average increase of non-teaching employees that was lower in the Badger State than it was across the country.

The purpose of the Fordham study is not to suggest whether or not this trend has had a positive or negative impact on America’s schools. It’s an in-depth look at the mechanics behind the classroom at a time where educational budgets are under more scrutiny than ever before. Districts are spending more and more money on non-teaching staff – and that leads to an important question as to whether or not those funds are best spent on hiring teachers or supporting the infrastructure outside of the classroom.