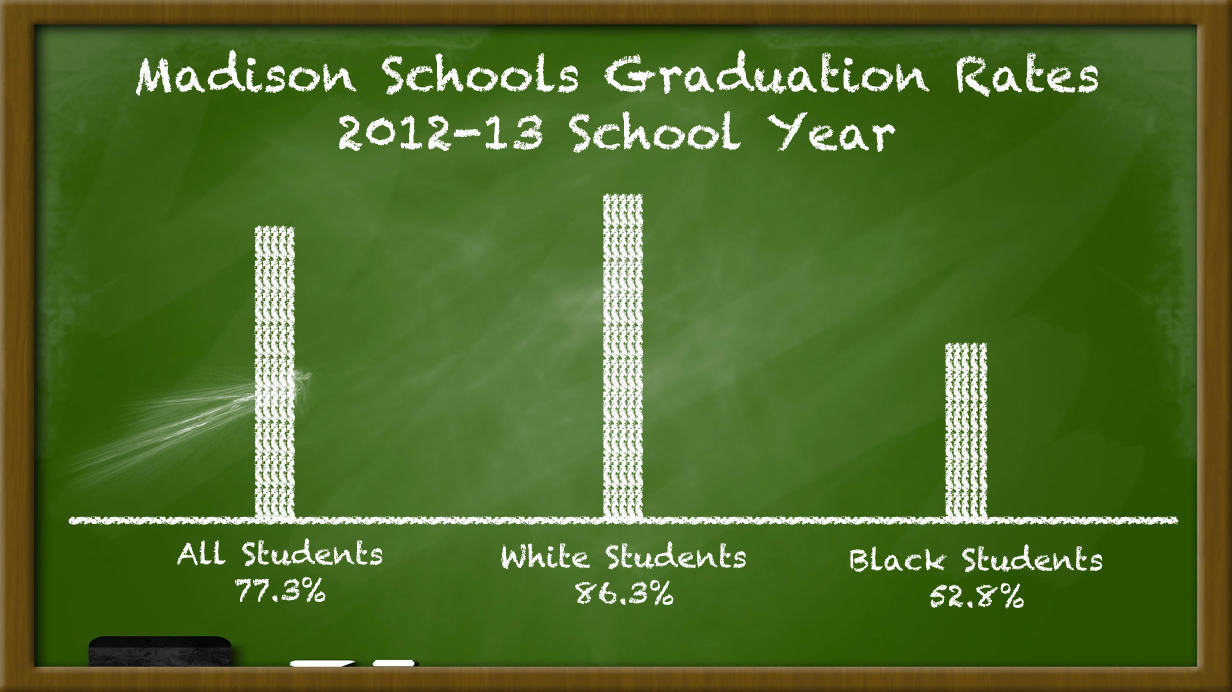 Last week, Madison Metropolitan School District (MMSD) Board member Ed Hughes lauded the district’s performance after the release of MMSD’s first-ever Annual Report. He went as far to say that the one-year improvements in student growth were a “big deal.”

However, that’s not the only “big deal” in Madison. According to the most recent data available from the Department of Public Instruction, MMSD was the last place an African American student would want to be if he or she lived in a large city and was intent on graduating from high school. Madison had the worst graduation rate for African-American students in the state’s 20 largest districts in 2012-2013. The city also boasted the third-largest achievement gap between black and white students – a difference of more than 30 percent.

Those numbers aren’t in the district’s Annual Report – possibly because they aren’t from the school year that just ended this May. However, the report appears to make an effort to skirt the issue. The achievement gap is mentioned a few times, but without any data to show whether or not the district is making any progress towards closing it.

In a district where the gap is a monumental problem – and in a year where State Superintendent Tony Evers declared the achievement gap to be a big enough problem to warrant its own task force – the omission of this data raises questions about the document as a whole. How can the Annual Report give parents a complete perspective of Madison’s public schools without a comprehensive report that tackles the biggest issues facing the district?

The missing achievement gap data isn’t the only issue that critics have raised about the Annual Report. Tim Siekar, Dean of the School of Education at Edgewood College and attorney Mark Spitzer-Resnick, formerly of Disability Rights Wisconsin, both raised concerns over the release’s promotion of the district’s strongest schools while sweeping the lowest-performing institutions under the rug. Spitzer-Resnick made a point to show that this achievement gap is not limited solely to graduation rates. From his blog:

While the district is able to claim many modest improvements over a one-year period, it’s not enough to gloss over the glaring problems that are staring Madison parents in the face. MMSD deserves credit for improvements, but they also deserve criticism for creating an Annual Report that reads more like a public relations piece than a comprehensive piece of research.

The district’s intentions may not have been to mislead parents and students, however, a report that ignores MMSD’s flaws could ultimately be harmful to the city’s residents.