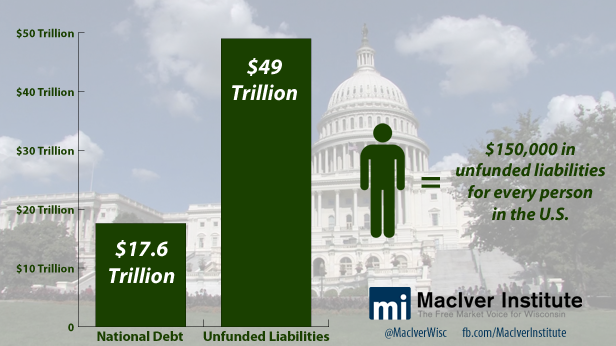 [Washington, D.C.] The Social Security and Medicare Boards of Trustees’ 2014 report shows that Medicare and Social Security, the most popular government programs in the U.S., have reached nearly $49 trillion in long-term unfunded liabilities. This equates to a liability of more than $150,000 for every person in the United States.

Romina Boccia, the Grover M. Hermann fellow at the Heritage Foundation, reported on the massive unfunded liabilities in the Daily Signal on Wednesday.

According to Boccia, the federal government has promised benefits to a large number of Americans that it can’t pay for, creating an uncertain and unsustainable future for those most in need.

To combat this long-term liability, Congress would need to be set aside $49 trillion today in order to secure Social Security and Medicare benefits in the future. If Congress fails to act, beneficiaries would see drastic benefit cuts after 2030.

Medicare Part A (primarily inpatient hospital services) has a projected depletion date of 2030, according to Medicare’s trustees. Because the program is funded almost entirely through the Medicare payroll deduction, benefits would either be cut, taxes increased, or a combination of both when the trust fund runs out.

“The programs are unsustainable as structured today,” Boccia wrote in her Daily Signal article. “The massive extent of their unfunded obligations is a clear indicator that reforms are urgent and necessary.”

The Heritage Foundation recommends Congress tighten eligibility criteria and help beneficiaries and applicants return to work. This will keep benefits available for those unable to work while increasing participation in the labor force by marginally disabled individuals.

Heritage also recommends using the success of a competitive system of private drug plans, such as the one used in Medicare Part D for a defined-contribution payment structure.

Without reform American taxpayers will incur a huge financial burden and seniors in need of care will face an uncertain future.