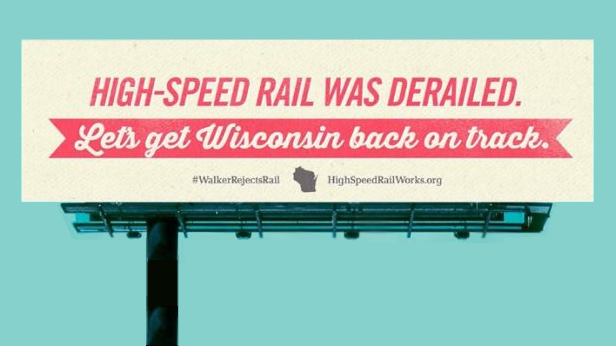 Drivers along I-94 near Oconomowoc may have noticed a new billboard attempting to distract them. The Environmental Law and Policy Center, based in Chicago, is trying to revive the debate over so-called high speed rail. The new billboard reads, “High-Speed Rail was derailed. Let’s get Wisconsin back on track.”

If you thought that the proposed “high speed rail” line from Milwaukee to Madison was dead like a parrot in a Monty Python sketch, think again. Even though Wisconsin wisely rejected the federal funds and they were “redistributed” to other rail projects, liberals never give up. They will keep fighting for 19th century technology into the 24th century of Buck Rodgers if they have to.

In 2010, after the Obama Administration cancelled plans for the rail project, transportation expert Randall O’Toole warned, “In the eyes of the people who want this, Wisconsin is going to get its high speed train. It’s just going to happen a couple of years later instead of now.”

Obviously, logic doesn’t faze them. By the time a driver saw the billboard, he would be traveling 65 miles per hour in the direction of Madison, if that was the driver’s final destination. The average speed of the “high speed” train will be 57 mph.

In addition to getting there faster, the car driver will not have to wait for another mode of transportation to take him from the station to his destination. He will also be able to transport as much as his car can carry. Whether it’s a large presentation, sales samples, or groceries for grandma, the car driver will have it all with him at his destination and whatever extra stops he chooses to make. Then when it’s time to go to another location, the car driver has his vehicle available at any time, and can even change his itinerary without having to consult a train schedule or the route map.

Had the high speed rail been built, our driver could have boarded the train at the station built by taxpayers for at least $5 million in federal stimulus funds (now wasted elsewhere) and who-knows-how-much in state and local tax money. However, it wouldn’t be in Oconomowoc. That planned station was cancelled by the Doyle Administration when Oconomowoc officials began asking too many questions about the cost, possibly $30 million.

Our driver would either have to go back to Brookfield or drive up to Watertown to catch the not-so-fast train. Either way, it’s abandoning the freeway and adding more time to the trip. It’s almost as if the billboard was taunting the drivers, “high speed rail, just not where you wanted it.”

When our poor driver finally got to the station (good thing the train would take cars off the road), he would wait for the train’s schedule to tell him when he is being picked up and when he is getting to Madison. On board the train, he’ll be able to carry with him as much as his lap can hold.

From the Madison station, a bus schedule would tell him when he is being picked up, when he would get close to his destination, and how far he would have to walk from the bus stop to his destination. Michelle Obama says the walk is good for him.

The bad news is his train trip would be subsidized by the taxpayers at a rate of $.40 per passenger mile, compared to the less than a penny per passenger mile if our friend had taken his car. The good news is the less-than high speed rail would create 55 permanent jobs for $810 million, not including operating costs, cost overruns, and building, operating and maintaining the train stations.

It would all be worth it, of course. Building the train would save the Earth. It would even allow the building of another train, this time from Madison to Minneapolis, and what could be more important than building more trains?

But even more important, our friends at The Environmental Law and Policy Center would be able to get from their downtown Chicago offices to their offices in Madison, WI without feeling guilty. And that is why they will never give in.