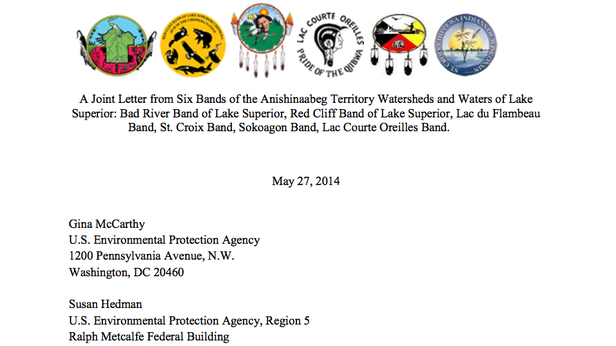 At the end of May, Mike Wiggins Jr., Tribal Chair of the Bad River Band sent a letter to the EPA requesting that they “initiate a public process under Section 404(c) of the Clean Water Act to protect treaty rights, aquatic resources, fisheries, wildlife, subsistence and public use in the Bad River Watershed and western Lake Superior Basin from metallic mining, including a potential Gogebic Taconite mine.”

Section 404(c) of the Clean Water Act is the same section that was recently used to put Pebble Mine, a copper mine in the Bristol Bay watershed of southwest Alaska, on hold. The EPA has used this administrative procedure to stop a project only 13 times since the Clean Water Act’s passing in 1972.

Gogebic Taconite (GTAC) has not officially applied for a permit yet, but the company is currently conducting research in the area to compile an environmental impact report required by the state. Once a permit application is submitted, the state Department of Natural Resources (DNR), the U.S. Army Corps of Engineers, and the EPA will conduct further testing of the area to assess whether the proposed mine can obtain a permit.

State Sen. Tom Tiffany (R-Hazelhurst), author of Act 1, which made changes to the mining permitting process in the state, told the MacIver Institute he is concerned that the EPA would stop a project without allowing an environmental review.

“You’re not even allowing them to go through [the environmental review] process. We wonder why some industry, some businesses, are not doing business in the United States anymore,” Tiffany said in an interview. “This is a prime example because it has such a chilling effect, especially for industries that are involved with natural resources. They are not even allowed the opportunity to see if they can do this in a safe manner.”

Scott Manley, Vice President of Government Relations at Wisconsin Manufacturers and Commerce, agreed that there is no reason the tribes should try to stop the mine before any environmental impact studies have been completed.

“Shutting this project down before the scientific data can be collected makes no sense from an environmental standpoint, and would immediately kill local jobs that have already been created up there,” Manley told MacIver. “They are asking the EPA to preemptively reject a $1.5 billion investment and thousands of jobs without a scientific basis to do so. It makes you wonder what mining opponents are afraid of, and why they suddenly oppose allowing the environmental review process to move forward.”

In the letter, the Tribes ask the EPA to stop the Gogebic Taconite mine because the “discharge will have unacceptable adverse effects on fisheries, wildlife, shellfish beds, municipal water supplies, or recreational areas.” The MacIver Institute has learned that five of the six tribes that signed the letter have wastewater treatment facilities with a recent history of violations of the Clean Water Act. The EPA’s Enforcement and Compliance History Online (ECHO) provides facility reports for wastewater treatment plants across the country and details the violations found at each plant.

According to the EPA’s website, the Bad River Band, Red Cliff Band, and St. Croix Chippewa wastewater treatment plants were still in violation of the Clean Water Act during the latest reporting quarter, from April to June 2014. This is the same time period during which the tribes sent the Section 404(c) letter to the EPA.

The Bad River Band, as previously reported by Media Trackers, had more violations of the Clean Water Act than any other wastewater treatment facility in the state, with the Red Cliff Band and Lac Du Flambeau Band following close behind. From 2004 to 2008, the New York Times reported that the Bad River Band had a total of 241 Clean Water Act violations at their treatment facilities, which include the Bad River Waste Water Treatment Plant, Diaperville Stabilization Lagoon, and the Birch Hill Stabilization Lagoon.

Noncompliance means the facility is in violation of an environmental requirement outlined in the Clean Water Act or other EPA enforced acts. Significant noncompliance poses a higher level of concern for the environment and it “is the most serious level of violation noted in EPA databases.”

During EPA testing from April to June 2013 the Bad River Band’s Birch Hill Lagoon facility had an E. coli level of 1309%, over 13 times the permitted amount. Another facility run by the Bad River Band, Bad River Wastewater Treatment Plant, maintained an E. coli level as high as 657%. According to the Centers for Disease Control and Prevention, E. coli can be “pathogenic, meaning they can cause illness, either diarrhea or illness outside of the intestinal tract. The types of E. coli that can cause diarrhea can be transmitted through contaminated water or food, or through contact with animals or persons.”

“There is a certain level of hypocrisy there by some who stand up on their bully pulpit, but are not taking care of their own backyard,” Tiffany added.

In light of the tribe’s violations, the EPA requested that the tribe make wastewater treatment plant upgrades. Tribal Chairman Mike Wiggins told Wisconsin Public Radio in February that they installed advanced equipment costing $1.6 million of their own money to update the facility. The tribe then received an extension on the compliance order citing contracting and weather problems creating delays. Originally the facility needed to be in compliance by January of 2014, but the EPA granted an extension until June 30, 2014.

The EPA expects a final compliance status report from the Bad River Band later this month.