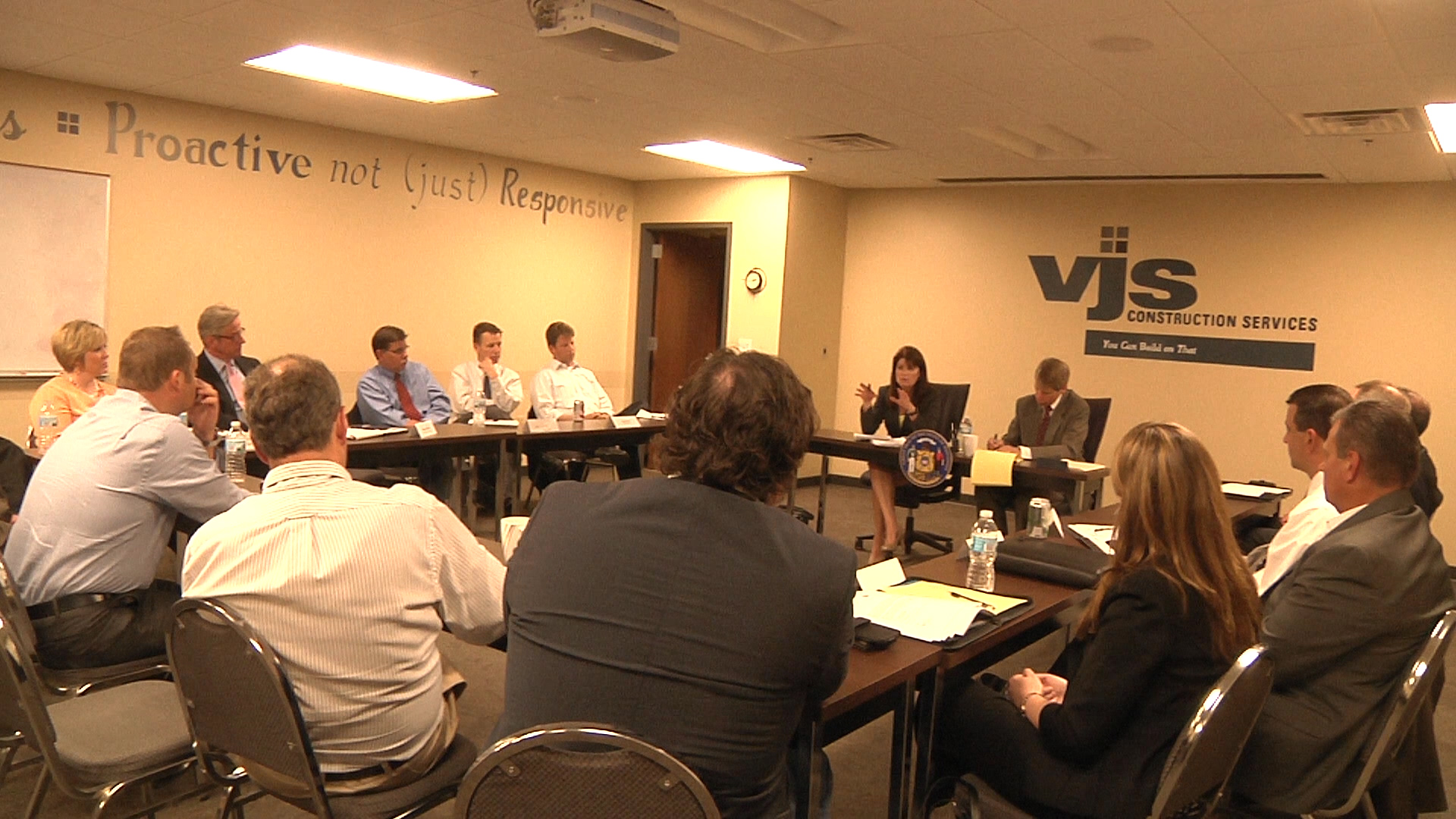 [Pewaukee, Wisc…] Lt. Gov. Rebecca Kleefisch and Department of Revenue Secretary Rick Chandler wrapped up their statewide series of tax roundtable discussions last Thursday. Meeting at VJS Construction in Pewaukee, the event was geared toward the construction and development industries, attracting a crowded room of local business leaders, bankers, and representatives from trade associations, among others.

Kleefisch and Chandler have utilized the roundtable discussions over the last six months to gather ideas from Wisconsinites about how to improve the state’s overall tax climate.

To start, Chandler presented a slideshow summarizing major changes in the state’s tax code and providing information on how Wisconsin measures up to other state tax systems.

Roundtable participants repeatedly referenced Wisconsin’s high property taxes and personal income tax rates, saying both hurt potential development. A few even gave examples of friends and family members moving to low tax states such as Texas and Florida. When Kleefisch asked the crowd to vote on whether the tax burden in Wisconsin was too high, too low, or just right, all but one said taxes were too high.

Chandler reminded the audience that Wisconsin’s property taxes have decreased for the average homeowner over the last four years. Estimated property tax savings for the end of this year on a median value home will be around $380, according to Chandler.

Even with recent rate reductions, individual income taxes in Wisconsin still rank 12th highest among the states according to Kleefisch.

The Tax Foundation, a non-partisan group that reports on tax policy nationwide, ranks Wisconsin fifth in overall state and local tax burden as a percentage of state income, based on 2011 data.

The two officials and many in the group talked about the importance of the construction and development industry in Wisconsin. According to some in the crowd, for every dollar invested in new development, six to eight dollars are returned to the local economy. However, concern over the negative impact effect of high taxes on Wisconsin’s competitiveness was a prevailing theme.

To get a sense of where the group stood on future tax reform, Kleefisch asked whether the crowd prefers slow rate reductions over time or immediate new credits and deductions. The answer here was overwhelmingly on the side of long-range rate reductions, which has been the trend in many of the other tax roundtables across the state.

Kleefisch also asked for input on which taxes should be “dialed down.” Many participants indicated support for a bump in the state sales tax, so long as it is offset by a decrease in either property taxes or income taxes. Some said that exempting certain essential items such as clothing could be a way to mitigate the impact on low-income Wisconsinites.

On government spending, the overwhelming consensus was that it was too high and that government should find ways to streamline services.

One comment that took many by surprise came from a participant from a real estate and development firm that does business in both the Milwaukee and Chicago areas. According to this developer, his company built two units, the same model and similar in price, one in Milwaukee and one in Chicago. The property tax bill for the Milwaukee unit came to about $62,000, while the same bill for the Chicago unit was $16,000.

Kleefisch thanked the crowd for participating in the round table discussion and encouraged them to continue the discussion on the tax reform website, www.taxreform.wi.gov.