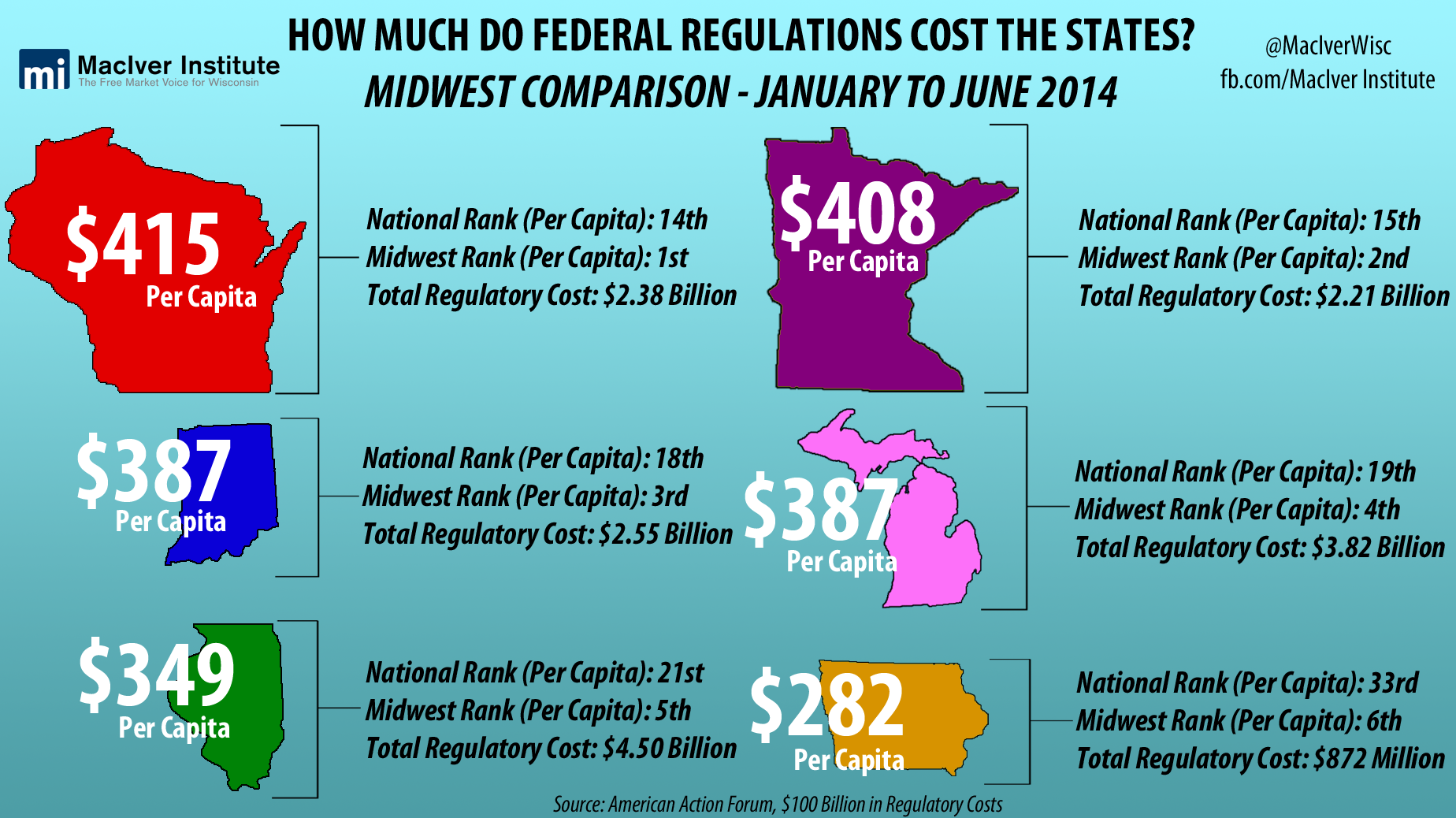 [Washington, D.C.] Federal regulations cost Wisconsin $2.4 billion in just the first half of 2014 according to a study by American Action Forum (AAF), a national public policy institute.

AAF’s study focused on regulations imposed just this year from the federal government, finding that $104 billion has been regulated out of the U.S. economy altogether. On a state by state ranking of costs, The Badger State ranked near the top of the list at 14th in the nation for both per capita costs and total costs.

The report’s author, AAF’s Director of Regulatory Policy Sam Batkins, attributed Wisconsin’s top 15 ranking to the prevalence of manufacturing in the State.

“Wisconsin’s regulatory burden is somewhat outsized because many rules directly affected the manufacturing and energy sectors,” Batkins told the MacIver Institute. “For example, Wisconsin has almost as many motor and generator manufacturing plants as New York State, accounting for roughly $650 million in burdens from just one rule.”

The study shows regulations fall heaviest on the energy industry and through environmental standards, with the Federal Department of Energy claiming $50 billion in regulations, and the EPA costing states around $40 billion.

Total federal regulatory costs could be upwards of $200 billion by the end of 2014, according to AAF.

New regulations will do little to help Wisconsin businesses who are struggling to grow and hire new employees in a sluggish national recovery. A Heritage Foundation report from earlier this year estimated that nearly 12,000 jobs would be lost in Wisconsin when new EPA rules on coal power plants go into effect next year.

Yet another report from The U.S Chamber of Commerce outlines how the Midwest would be heaviest hit from a 645-page EPA plan targeting thirty percent emissions reductions by 2030. The study shows that $7.4 billion in GDP could disappear and 31,700 jobs eliminated in the five state region that includes Wisconsin.

When measuring total costs to the states, Wisconsin is one of many Midwestern states to be ranked in the top 15 nationally. Illinois ranked sixth with a burden of $4.50 billion, Michigan ranked eighth at $3.82 billion, and Indiana ranked 11th at $2.55 billion.

Wisconsin and its neighbors combined for a total regulatory burden of more than $16 billion in the first six months of 2014.