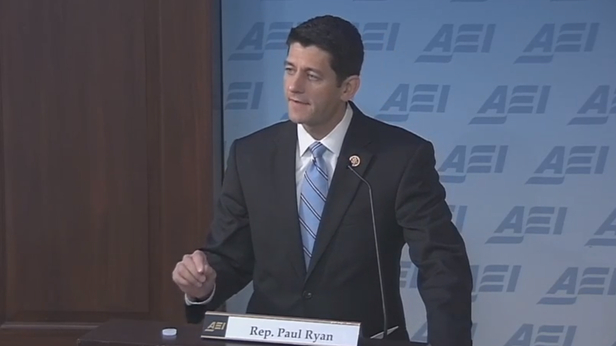 Ryan Introduces Policy Proposals to Combat Poverty Across the Country

[Washington, D.C.] U.S. House Budget Committee Chairman Paul Ryan (R-Janesville) introduced a range of policy ideas to combat poverty in America during a speech at the American Enterprise Institute (AEI) on Thursday morning. Ryan has spent the last year touring the country and learning from people who are in his words, “fighting poverty on the front lines.”

The ideas that Ryan introduced are included in a Discussion Draft from the House Budget Committee titled, Expanding Opportunity in America.

While the Wisconsin Congressman has put forth multiple legislative proposals, his main goal is to start a conversation about the best ways to combat poverty.

First, Ryan proposes to reform the current safety net system. He highlighted this in a previous interview with the MacIver Institute where he said the current poverty programs are simply not working.

In fact, the U.S. spends almost $800 billion on 92 different federal programs to fight poverty every year. Even with this massive influx of federal spending, the poverty rate is nearly identical to what it was 50 years ago, when President Lyndon B. Johnson launched the War on Poverty.

To reform the system, Ryan suggests streamlining federal programs into what he called the “Opportunity Grant.” His plan would allow states that choose to participate to combine up to eleven federal programs into one funding stream. The goal is to reduce the bureaucracy of the current system, while giving states more flexibility. Along with greater flexibility, he said greater accountability would be key.

“[The state] would get to combine into one stream of funding up to eleven different programs–things like food stamps, housing assistance, child care, cash welfare,” Ryan said. “This new, simpler stream of funding would become the Opportunity Grant, and it would be budget neutral. The state would get the same amount of money as under current law–not a penny less.”

Ryan laid out a clear set of conditions for states that accept this new pilot program.

“First, you’ve got to spend that money on people in need–not roads, not bridges, no funny business. Second, every person who can work should work. Third, you’ve got to give people choices. The state welfare agency can’t be the only game in town. People must have at least one other option, whether it’s a non-profit, or a for-profit. And fourth, you’ve got to test the results. The federal government and the state must agree on a neutral third party to keep track of progress,” he proposed in his speech.

This first proposal would allow individuals to work with one person at either a state agency or a local organization approved by the state. Ryan said this would allow for more personalized aid and ensure people could find help with other problems that may be trapping them in poverty, like addiction or a broken home.

Ryan said the EITC is one of the few federal programs that has worked, so he would expand it.

“I’d roughly double the maximum credit for childless workers to $1,005. And I’d lower the minimum eligibility age from 25 to 21,” he said. “This is similar to what the President has proposed, but with one big difference: I wouldn’t raise taxes.”

The Congressman said he would pay for it by eliminating ineffective programs and corporate welfare.

Another aspect that Ryan highlighted is the need to reform education. He laid out multiple proposals in his Discussion Draft including converting the Head Start program into a block grant, allowing the portability of federal dollars for elementary and secondary education and simplifying the free application for federal student aid, among many others.

Ryan summed up his education reforms in his speech by saying access to education needs to be expanded.

“We need to give students more options–in other words, we need accreditation reform, similar to what my friends Senator Mike Lee and Congressman Ron DeSantis have proposed,” he said. “Let other schools in on the action. And we need to keep reforming our job-training programs. If employers can design their own curriculum, then workers will know just what skills they need.”

Reforming the criminal justice system was another topic of Ryan’s proposal. He said low-risk, non-violent offenders need to be given a second chance. His proposal include changes to sentencing guidelines and incorporating counseling and job training.

“A lot of families are trying to get ahead, but Washington’s getting in the way. So I’d propose a simple rule for all future regulations. If you’re a federal agency, and you want a regulation that would unduly burden low-income families, you’ve got to go to Congress,” he proposed during his speech. “If they want it, they should have to fight for it–on the record. It’s your government; you deserve a voice and a vote.”

Finally, to add accountability, Ryan proposed creating the Commission on Evidence-Based Policy Making in his Discussion Draft. This board would be made up of leading experts from economists to statisticians and would help evaluate how poverty programs are actually performing. The commission would then report to Congress.

While Ryan spent the last year learning about ways people are fighting poverty and actually making a difference, he still wants this will be the beginning of a conversation. That is why his policy proposals are incorporated into a Discussion Draft. He even encouraged people to send their own ideas to ExpandingOpportunity@mail.house.gov.

“You know, when I went to Milwaukee or Denver or Indianapolis, nobody asked me what party I belonged to. They welcomed anybody who was willing to listen and learn,” Ryan said as he concluded his speech. “That should be our approach in Washington. Enough with the politics. Let’s talk solutions–because this isn’t a Republican or a Democratic issue. It’s an American issue.”