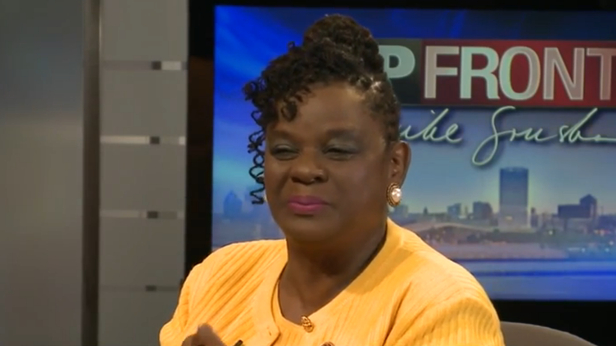 Milwaukee area Congressman Gwen Moore was on UpFront with Mike Gousha recently to talk about the Democratic primary election challenge from former State Senator Gary George. If you’re looking for an election with potential entertainment value, this one certainly qualifies.

However, when Moore was asked about George’s candidacy, she seemed more interested in running against Governor Scott Walker than George.

It’s too bad. After her rendition of “Hit the Road Scott!” while campaigning for Milwaukee Mayor Tom Barrett during the attempted recall of Walker, I was hoping for a version of “Back on the Chain Gang” or “I Fought the Law and the Law Won” for George’s candidacy.

Moore followed that complaint with two attacks on Walker that we have heard before: he rejected the jobs that came with high speed rail and he rejected the expansion of Medicaid funding.

Of the train, Moore said, “We got $800 million and our governor just goaltended, and took that money out of the queue. That was about to bring back life and jobs, at least 500 jobs to what had been the old AO Smith grounds automotive.”

Let’s start with the $800 million for the less-than high speed rail line. Along with forgetting that she works in Washington DC, Moore might be forgetting that the $800 million in Washington DC money would come from taxpayers, including those in Wisconsin. In addition, the state of Wisconsin would have been on the hook for the ongoing maintenance costs. According to a MacIver Institute analysis, the new rail line would only have created 55 new permanent jobs.

The AO Smith factory site on Milwaukee’s north side is now part of the “Century City” project. Under a Jim Doyle-era agreement, the Talgo train facility was intended to maintain two trains purchased in a controversial no-bid process that would replace existing Amtrak trains on the Hiawatha line. The cost of operating and maintaining the trains would have been $10 million more than the current trains. The maintenance facility would have cost up to $63 million.

While the entire “Century City” project is projected by the city of Milwaukee to someday provide 1000 jobs, the Talgo site had 65 people according to a Fox 6 news report. When Talgo opened in Milwaukee they announced they were looking to hire 125 people, not 500.

As for the federal Medicaid spending increase rejected by Walker, Moore said, “The governor did not take the 100% paid for Medicaid money. We have 8,000 fewer people being covered for more money.”

Again we should hope Moore understands federal funds are “100% paid for” by the taxpayers, one way or another. There is no such thing as free money.

But even assuming the federal funds grew on trees next to the cherry trees along the tidal basin in Washington, they’re still not “100% paid for.” The 100% federal subsidy for increasing Medicaid coverage to 138% of the federal poverty line is only for three years. After that it drops to 90%, and as the costs of Obamacare grow there is a likelihood the federal subsidy could drop to the “normal” rate of 60%. Even under the current assumptions, the cost to Wisconsin would be $3.39 billion over seven years while federal taxpayers would pick up $3.25 billion.

Instead of 8,000 losing coverage as Moore claimed, the Wisconsin Department of Health Services is reporting 97,509 more people under the federal poverty line have health insurance coverage in the BadgerCare program.

Above the poverty line, 133,000 Wisconsinites are currently receiving coverage through the exchange. According to the federal government, 90% of them are enrolled in plans receiving a federal subsidy which is, on average, 74% of the premium cost.

Instead of being concerned about Walker, Moore and George should be more concerned how the Obamacare law was written by Moore and her Democratic colleagues in Washington. The Halbig v. Burwell decision that is being appealed by the Obama Administration says that only states that set up their own health care exchanges can receive federal health care subsidies for the insurance premiums offered. The final result of the case could be one which even President Barack Obama cannot just issue a waiver to solve.