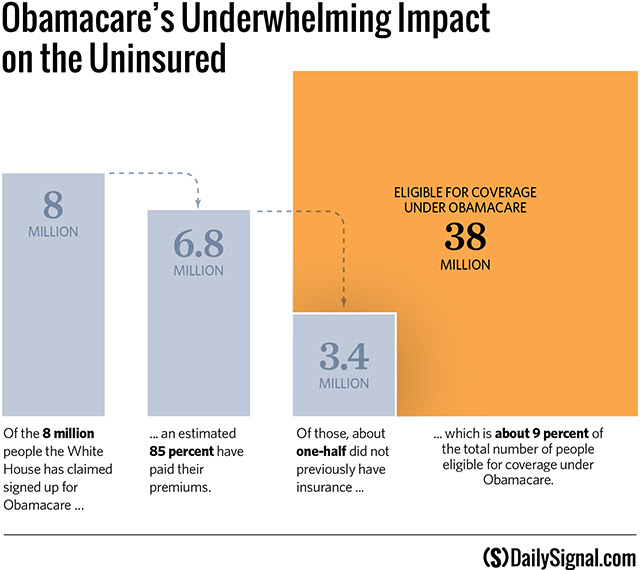 Despite early claims by the Obama administration that Affordable Care Act marketplace enrollments had exceeded targets and costs were lower than expected, a closer look shows neither to be true. Anecdotal successes paint a picture of accomplishment, but data tells a story of higher deductibles and greater consumer costs. The administration has not released any new enrollment numbers in over two and a half months, but as of March 31, the president announced that eight million people had enrolled.

In a special report by Sharyl Attkisson for The Daily Signal, a closer look is taken at enrollment numbers and costs. While eight million enrollees seems like a great triumph for the uninsured, it was fluffed up to include enrollees who selected a plan, but never actually paid. When this is factored in, actual enrollment drops to 6.4 million to 6.8 million; both of which are below the seven million target.

Many positive stories have made their way into talking points and stories of success, but a survey by the Kaiser Family Foundation shows that 43% of those who enrolled in the exchanges already had insurance. Based on the data from Kaiser, only four million enrollees were previously uninsured.

The fundamental component to the success of the Affordable Care Act is enrollment on the exchanges of the uninsured, and without high enrollment, the system is not fiscally sound. Despite claims that ACA would significantly reduce the amount of uninsured, no such change has happened.

Finally, state co-ops also have low enrollment, sitting at around 80% of expectations. These co-ops received federal loans as funding, but may not be able to repay the loans due to low enrollment numbers. While Iowa and Nebraska have a collective 76,881 enrollees, at a cost of $1,464 per enrollee in federal funds, Tennessee had 354 enrollees, each costing $207,081. With numbers like these, taxpayers could stand to lose $860 million from these loans.

The non-partisan Congressional Budget Office last reported that the Affordable Care Act is expected to increase federal spending by $1.383 trillion. However, they are no longer able to effectively determine the overall cost due to changing provisions and unclear numbers.

As costs continue to rise and enrollment continues to underwhelm, it looks like high costs and low reward, all funded by taxpayers.

See the full report at DailySignal.com