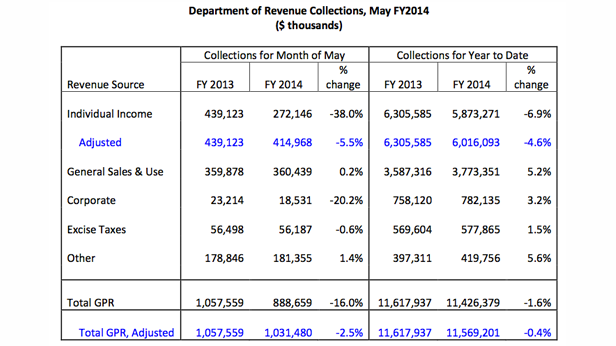 Individual income tax collections are down 5.5 percent for the month of May from $439.1 million to $415 million. In April, Gov. Scott Walker ordered the Department of Revenue (DOR) to give Wisconsinites an immediate tax cut by lowering the state’s income tax withholding tables. So, this drop in revenue to the state, at least in part, was predicted. At the time, DOR Secretary Rick Chandler said the withholding table changes would cost the state $323 million but would allow a typical Wisconsin family to keep an extra $500 of their own money in 2014.

However, corporate tax collections are up 3.2 percent fiscal year to date.

General sales tax collections saw a 0.2 percent increase for the month of May and are up 5.2 percent for the fiscal year.