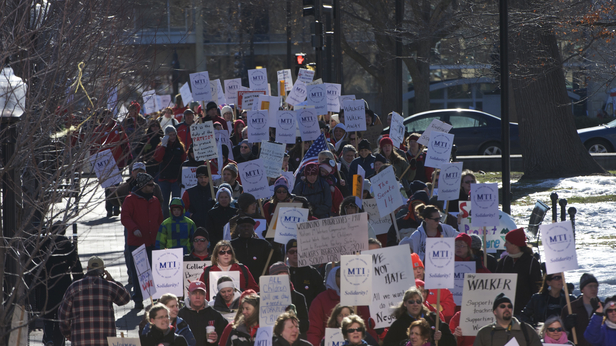 After weeks of debate and a unanimous decision to collectively bargain for a new pact, Madison Teachers, Inc. (MTI) and the Madison Metropolitan School Board have agreed on a new contract for 2015-2016.

The deal will provide all teachers with a 0.25% raise for the school year. Stakeholders on both sides of the deal worked to put a collectively-bargained deal together before a State Supreme Court ruling on the union’s complaint over local bargaining rights could be handed down. MTI had successfully challenged the limitations that 2011’s Act 10 had placed on a public sector union’s ability to negotiate the terms of future contracts. That decision was appealed by the state, and a final ruling from Wisconsin’s highest judicial body is expected to be delivered this summer.

MTI Executive Director John Matthews noted that Act 10 still played a role in the negotiations, effectively stripping the union of its ability to demand larger raises.

“There’s no way we would go back (to members) with that [.25% raise] as a provision in the collective bargaining agreement, if the playing field for bargaining was as level as it used to be,” Matthews told the Wisconsin State Journal.

There are questions over whether or not this new contract was a legal transaction under Act 10. The Wisconsin Institute for Law & Liberty (WILL) warned the district of potential litigation that could come with a decision to extend previously-enacted collective bargaining agreements.

“Act 10 prohibits terms that are inconsistent with its provisions in any extension, modification or renewal of a preexisting contract. Both the previous extension and any new extension would, thus, violate Act 10,” said WILL President Rick Esenberg back on May 15.

Act 10 allows public employees to bargain for pay raises, provided they are in line with inflation. That could potentially fall within the limits of MTI’s slight salary increases for the 2015-2016 school year. However, other aspects of the MMSD contract, such as new policies that determine how new teachers are allowed to apply for open positions and existing ones are allowed to transfer to new roles, could be subject to a legal challenge.