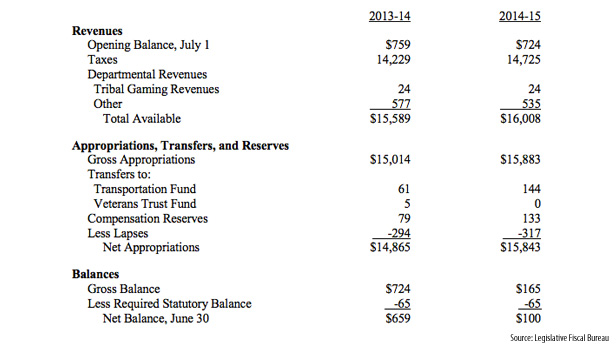 [Madison, Wisc…] The State of Wisconsin’s current budget is projected to end with $100 million in surplus according to a new report from the non-partisan Legislative Fiscal Bureau (LFB).

The surplus comes after the state cut taxes three times in the past year. Wisconsin cut income taxes by $650 million last June as a part of the 2013-15 state budget. Property taxes were reduced by $100 million last October when a surplus was realized, and the governor recently signed into law more than $850 million in income and property tax relief.

In addition to the 2013-15 budget surplus, Wisconsin also has $279.5 million in the budget stabilization fund, or the rainy-day fund.

The Fiscal Bureau also released data that shows the state has a $642 million projected structural deficit. The structural deficit projects the state’s needed revenues for the 2015-17 state budget, without accounting for any changes to appropriations or revenue growth.

Previous reports from LFB show that modest economic growth would eliminate a structural deficit of this size.

The full report from the Fiscal Bureau is available here.