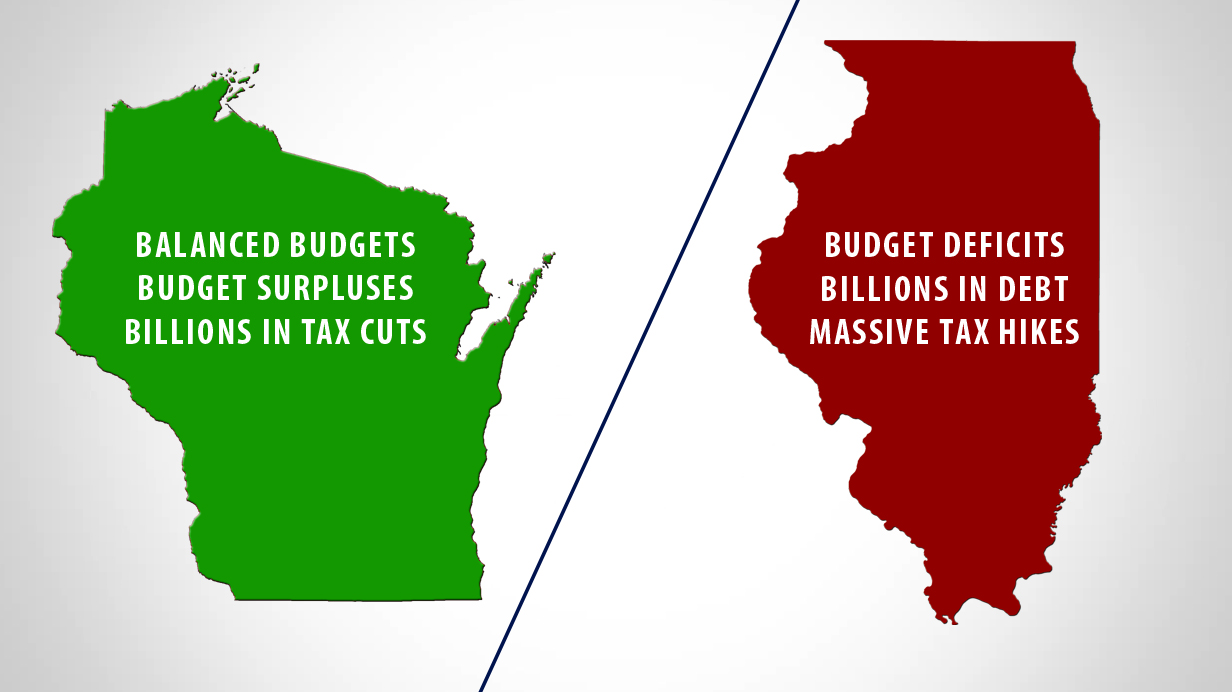 The states share a common border, but Wisconsin and Illinois are going in opposite directions when it comes to managing taxpayers’ money.

Illinois is coming up on its deadline this week to pass a state budget. Unlike Wisconsin’s two-year “biennium” budget process, Illinois has a one-year annual budget that must be approved by the end of May.

A report released in March from the Illinois State Comptroller has revealed some ugly numbers. For the 12th straight time, Illinois finished its fiscal year with a general fund deficit. That means that Illinois’ cash flow has seen more money go out of its coffers than has come in for 12 years running. In fiscal year 2013, that shortage was over $7 billion, a burden of $1,745.86 for every Illinois taxpayer. The inability to balance the books comes even when lawmakers have the ability to delay some payments such as Medicaid until the following year. That law, Section 25 of the State Finance Act, is allowing Illinois to defer $2.3 billion to next year’s bills.

Another eye-popping figure from the Comptroller’s report is the overall “net position” of the state. Illinois has accrued $47 billion dollars of debt if you count all government activities against all government assets. $29 billion of that deficit has been built up in the last eight years.

The general fund and net deficits add to the pain of Illinois’ nation-leading $100 billion dollar unfunded pension liability. That astronomical number works out to $7,812.50 for every man, woman, and child in the state. The pension problem was finally addressed by the state legislature last December with a reform bill signed by Gov. Pat Quinn (D-Illinois). Critics, however, believe the changes made will do little for the solvency of the state.

The pension bill will make a number of adjustments to the state’s retiree system. Most notably, it will limit cost of living adjustments (COLA), cap benefits at a certain salary level, raise the retirement age for workers under 45, and require the state to contribute more funding as a guarantee that current retirees will receive benefits.

The legislation has received criticism for not doing enough to curb liabilities and is facing aggressive legal opposition from unions who question its constitutionality. The latest estimate shows that $137.4 billion will be saved over 30 years, but that is over $20 billion less than originally predicted and has very little short-term impact. Overall, savings will only reduce the $100 billion shortfall to anywhere from $75 billion to $80 billion.

A coalition of public sector unions have filed suit against the law because they believe it violates the state’s constitutional ban on reducing pension benefits for public pension system members. The courts are unlikely to decide the matter before the law kicks in on June 1st, adding further confusion to reform prospects.

On taxes, Illinois recently escaped a push by Democrats to implement a progressive income tax system that would replace the existing flat tax. In April, after months of debate, Democrats and proposal figurehead state Sen. Don Harmon (D-Oak Park) failed to receive enough support for the effort and dropped the proposal.

The final plan introduced by Harmon would have amended the state constitution to allow for a progressive system and would have set tax rates at 2.9 percent for the first $12,500 of income, 4.9 percent for the next $167,500, and 6.9 percent for income over $180,000. Illinois currently has a flat income tax rate of five percent, which is meant to be a temporary increase from three percent.

Ben VanMetre, Senior Budget and Tax Policy Analyst at the non-partisan Illinois Policy Institute (IPI), told the MacIver Institute that the progressive tax plan would have been just another tax increase for Illinois residents.

“It was a long, arduous fight, and proponents of a progressive income tax structure changed their tune numerous times, especially when it came to how rates would look under a new plan,” VanMetre said. “In March 2014, Harmon endorsed a rate structure that would have increased the tax bill for anyone with a taxable income of more than $22,000 per year. That’s a tax hike on working and middle class Illinoisans.”

A second push by Gov. Quinn to increase taxes in Illinois involves making the “temporary” income tax hikes passed in 2010 permanent. The 2010 move saw personal income taxes increase by 67 percent and corporate income taxes by 46 percent. Quinn would like the increased revenue brought in by higher taxes to help pass his proposed 2015 budget.

Additionally, IPI found that in 2012, 80 cents of every dollar from the tax increase went to pensions. Just 20 cents were left over for government services such as education, transportation, and health care.

Taxpayers will see the hikes expire in 2015 if they are not extended. According to VanMetre, keeping the tax hikes permanent would be a breach of taxpayer trust.

“Quinn is asking Illinois families to sacrifice so they can fork over even more of their hard-earned money to a dysfunctional state government. Meanwhile, he’s refusing to do the same,” VanMetre wrote for IPI. “Quinn would much rather prop up the status quo, waste taxpayer money and maintain sweetheart deals for special interests.”

With the deadline to pass a budget coming this Saturday, it looks like Quinn will not get the taxes or budget he wants. The Illinois News Network reported on Monday that House Speaker Michael Madigan (D-Chicago) looks to have dropped plans to make the new budget consistent with permanent tax increases. Madigan reported that there was simply not enough support for either the permanent tax hike or the accompanying budget in the Democrat caucus meeting last week.

Illinois Democrats are now hammering out a “middle of the road budget” that will try to compromise Quinn’s aspirational spending goals with a so-called “doomsday” budget that was rejected by the House last Friday.

Compare the Illinois crisis with Wisconsin’s situation, a state that has seen a dramatic financial turnaround since starting 2011 with a budget deficit of $3.6 billion.

Responsible fiscal management in Wisconsin has led to budget surpluses and significant tax relief. After realizing three separate surpluses in 2013 and 2014, Wisconsin cut taxes three separate times and will still finish fiscal year 2015 with a $100 million surplus. The first quarterly general fund cash flow report of 2014 also demonstrates the state’s ability to stay in the black on a month to month basis, unlike its neighbors to the south.

Wisconsin will reduce taxes by $1.9 billion by July 2015 according to the non-partisan Legislative Fiscal Bureau. That figure includes cutting income taxes by $746 million, property taxes by $535 million, and an overall business tax decrease of $443 million.

Businesses in both states are noticing the difference, according to responses from the 2014 U.S. Bank Small Business Survey. In the survey, Wisconsin businesses where asked for the main reason they feel better about business conditions in their state. They cited better government planning and lower taxes as their top reasons. In the same report, Illinois small businesses said that higher taxes and poor government planning were the top reasons why they feel worse about their state’s economic prospects.

Looking forward, Illinois state lawmakers will be returning to the drawing board to find solutions for their widening budget and pension gaps. Meanwhile, Wisconsin taxpayers will have the comfort of fiscal sustainability going into next year’s budget debate.

The MacIver Institute will continue to report new information on the tax and budget situations in Illinois and Wisconsin. Check MacIverInstitute.com often for updates.