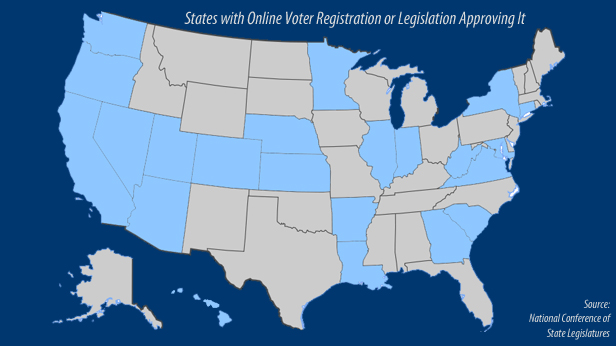 [Madison, Wisc…] The Assembly Committee on Campaigns and Elections held an informational hearing on the subject of online voter registration on Tuesday.

Kevin Kennedy, Director and General Counsel of the Wisconsin Government Accountability Board, spoke for informational purposes only but highlighted many of the benefits of online voter registration.

“Legislation that enables online voter registration would make a tremendous leap forward in the administration of elections in Wisconsin,” Kennedy said. “The basic voter registration data will be more accurate if it is entered online by the voter. Online registration eliminates data entry errors resulting from difficult to decipher paper forms.”

“One practical problem we know online voter registration will help solve is the scourge of door-to-door voter registration drives,” Kennedy said. “In theory, grassroots voter registration efforts ease a burden on local election officials and improve voter turnout. In practice, they generate thousands of duplicate registration forms from voters who are not sure whether they are already registered.”

Manitowoc County Clerk Jamie Aulik echoed Kennedy’s testimony that online registration would reduce errors, increase efficiency, and save money. However, he did raise concerns that it would take away the likelihood that municipal clerks would get to know voters in their district.

Aulik also said he would want to make certain that local clerks had the ability to review the data from a state online voter registration system to ensure new registrations or changes are complete and accurate.

“A reporting system of the various transfers is absolutely something I would recommend,” Aulik said during the hearing.

Racine County Clerk Wendy Christensen said it is likely that an online registration system would encourage more people to participate in the election process, but was worried people may register in the wrong municipality.

“Will [the online voter registration system] allow someone to register in the wrong municipality?” Christensen asked the committee. “You would hope it shouldn’t, but again we are relying on that the voter knows that they live in the village of Caledonia, with a Racine mailing address, as opposed to the city of Racine.”

Tammy Patrick, Federal Compliance Officer for Elections in Maracopa County, Arizona, testified in front of the committee about her state’s experience with online voter registration for the past 12 years. Patrick argued that if implemented correctly, online registration helps improve election administration.

“We really feel that online voter registration helps voters who are challenged by time and distance like our military and overseas voters, by voters who have mobility concerns, by voters who are using assistive technology, they have that on their own PC’s and are therefore able to register to vote independently,” she said. “It really does streamline the election day process.”

Kennedy also testified that it could be a cost-saving program in Wisconsin. According to research at the LaFollette School of Public Affairs at the University of Wisconsin-Madison, online voter registration could save all units of government in the state more than $1 million in total over ten years.

David Becker, from the PEW Charitable Trusts, also said online registration could reduce the amount of voter registration errors and pointed out it is a large problem nationwide.

“About 24 million registrations are inaccurate at any point in time,” Becker said. “That is one in eight registration records nationally.”

Rep. Kathleen Bernier (R-Chippewa Falls), chair of the committee, told the MacIver Institute that she is happy multiple experts came to Wisconsin to discuss the pros and cons of implementing an online voter registration system in the state.

Bernier said the power to verify someone’s ability to vote instantaneously was a big reason she supports online registration, but pointed out it needs to be a safe and secure system.

“If you are an elector, you know right away whether your registration cleared, or if you are an elections official, you can put in that data while the person is standing there, and they will know right away if there is a problem,” Bernier said. “I immediately grasped onto that having been a previous elections official, that this is a really good thing.”

The committee chair said she expects to find bipartisan support for a plan and will continue to work with other legislators before the next legislative session begins. Democrats on the committee seemed supportive of the idea, but Rep. Fred Kessler (D-Milwaukee) was upset the hearing was being held after the session had ended.

During the hearing, Bernier cut off Kessler’s remarks and asked him to keep his remarks related to the topic. She said that just because the session has pretty much come to a close, it does not mean legislators stop working.

Bernier said legislators should not stop working on bills, just because the floor period is over. She expects the legislature to bring up a bill that would create an online registration system during the next legislative session or possibly in the budget.