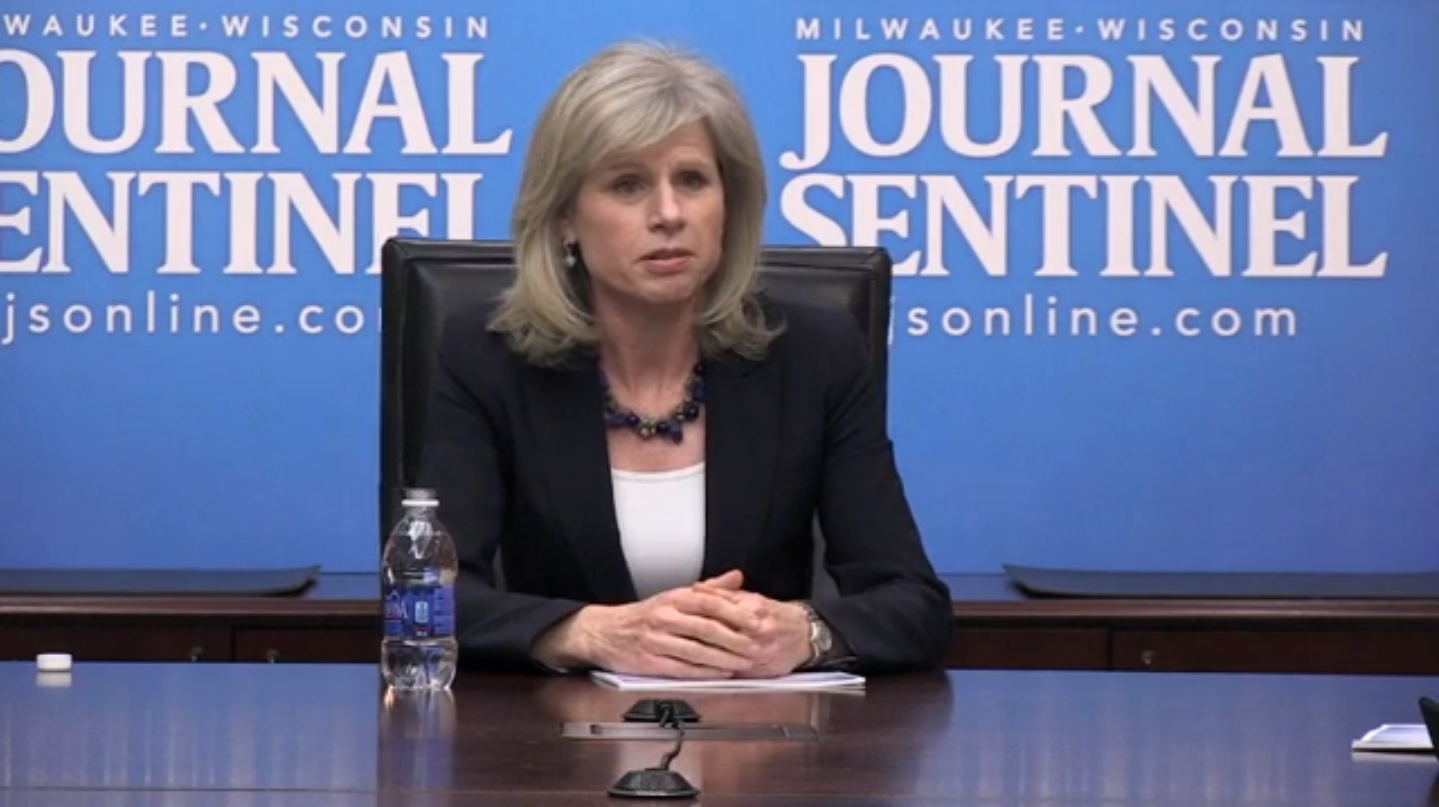 Democratic candidate for governor Mary Burke kind-of-sort-of-maybe has a position on Act 10, at least until the next focus group convenes. In a video recorded interview with the Milwaukee Journal Sentinel, Burke said that she would have achieved the savings of Act 10 through collective bargaining. She would not have used the sweeping reforms established by Act 10 that have brought state and local government expenditures down and led to three tax cuts in this budget cycle alone.

She said, “I think it was only fair to ask for contributions to health care and to pensions, um, but I think those could have been negotiated, ah certainly firmly but fairly.”

Negotiated with whom? Was Burke paying attention in 2010-2011? What Burke said probably sounds nice in a focus group setting but it sounds terribly naïve given what was happening at both the state and local levels.

Using Burke’s approach, Wisconsin would still be bouncing from one budget crisis to the next as it did under Governor Jim Doyle, the administration in which Burke served. If those concessions were necessary and could be achieved through negotiations, then why didn’t she urge Doyle to try to “firmly and fairly” negotiate those concessions while she served in his administration? Because it would have been a one-way conversation with no results.

After Governor Scott Walker was elected in 2010 on a promise of getting state employees to contribute more towards their pensions and health care, Democrats tried to ram through contracts with state employee unions in a lame-duck session that would have prevented Walker from negotiating the necessary changes. The Democrats even got disgraced former state Representative Jeff Wood out of jail to make sure they had enough votes in the assembly. The effort failed by one vote in the state senate.

If that was not a clear indicator of how tough negotiating the savings would be, how the unions behaved after the Act 10 reforms were announced certainly demonstrates there was no hope for a negotiated settlement. Above the roar of the rioting public employees in the state capital, WEAC’s Mary Bell said that she would be willing to compromise on paying more towards health care and to pensions.

However, even as Bell was saying that, local school boards controlled by local teachers unions were hurriedly pushing through contracts that would prevent the local districts from taking advantage of the savings built into Act 10. Teachers unions in Milwaukee and Kenosha chose layoffs over concessions, just as they did before Act 10.

As the actions of the local unions show, Burke is missing the bigger point of Act 10. In order to balance the state budget, state and local aid had to be cut. Making those cuts without giving local governments the means of cutting their own budgets would have been a disaster. Because Act 10 removed benefits from the collective bargaining process, school districts and local governments were able to find savings to offset the cuts in state aid.

Burke contends that by keeping collective bargaining rights as they were she would have been able to negotiate the cuts necessary to balance the budget. Perhaps she should talk to Milwaukee Mayor Tom Barrett, the Democratic candidate for governor in the recall election and the 2010 election. Barrett complained that Walker did not go far enough by leaving the collective bargaining rights on benefits intact for police and firefighters. Apparently some unions are just immune to the negotiating charms of public officials when it comes to their benefits.

Burke also complains that Act 10 divided the state, and that collective bargaining for the concessions necessary to balance the budget would have kept the state unified. If the state just made the cuts in state aid without empowering the local governments to make the changes in benefits to offset the cuts, instead of one giant parade of malcontents in Madison we would have had massive disruptions across the state. Every local unit of government would have had to go to the unions and say, “layoffs, or benefit cuts?” In some cases, the choice would have been neither, and local governments would have had to hold referendums to exceed the revenue caps. That’s not a formula for moving the state forward undivided.

The savings from the passage of Act 10 are real, and Wisconsin is benefitting at all levels of government. An analysis by the MacIver Institute last October showed taxpayers saved $2.7 billion. Of that total, school districts saved $1.9 billion. Meanwhile the legislature and Governor Scott Walker have cut taxes $2 billion.

Burke is promising to restore some collective bargaining for unions, although she continues to be vague on how far she would go to repeal Act 10. She cites her experience at Trek Bicycle as proof she could have negotiated with the unions to compromise on benefits. But unlike at Trek Bicycle, the state can’t export jobs to non-union factories in China, and the public employee unions here were more entrenched than the Communists in Beijing.