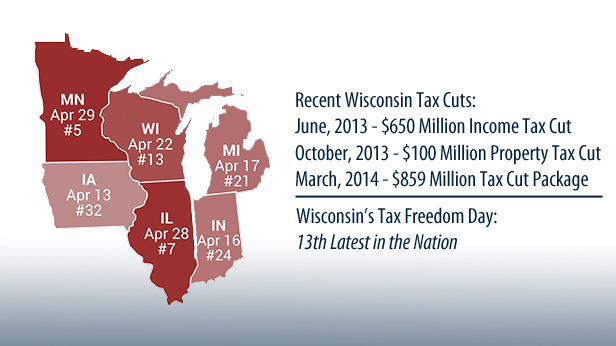 Recent Tax Cuts Have Helped, But Wisconsin Has a Long Way to Go

Gov. Scott Walker and the legislative Republicans, who control the majority of votes in each house, are proud of the plentiful tax cuts that they have passed in the last three years.

In fact, the theme of the 2013-14 legislative session was characterized by one simple, overarching idea: cut taxes every time you can. The tax cutting started with a $650 million income tax cut in the Governor’s budget last year, got a $100 million property tax cut boost when our fiscal discipline led to a bigger than expected surplus, and it culminated with a $859 million tax cut just before everyone left town to run for re-election.

Thanks to this mindset, Wisconsinites all across the state have been benevolently granted back their own money to the tune of $2 billion.

It should be noted that almost every state observed a later Tax Freedom Day thanks to increased federal taxes.

The Badger State currently observes the 13th latest Tax Freedom Day. That means taxpayers in nearly three-quarters of the states have a lower tax burden than those in Wisconsin.

So, while we can commend the leaders of our state for getting us back on track after years of massive budget deficits and billion dollar tax hikes, there is still a lot of work to be done.

Iowa, Indiana, and Michigan all have earlier Tax Freedom Days than Wisconsin thanks to their lower overall tax burdens.

Our state is making great strides, unlike our other neighbors, Minnesota and Illinois. Minnesota recently took a page out of Jim Doyle’s playbook by adding a new tax bracket at a higher rate. Apparently its top income tax rate of 7.85 percent was not high enough, so Minnesota added another bracket at 9.85 percent.

Illinois is looking to make the 2011 temporary income tax hike – surprise, surprise – permanent, and it could get even worse. Legislative leaders in Illinois are trying to pass a constitutional amendment that would change their state’s tax code from a flat tax to a progressive tax. While current law would sunset the tax hike and bring Illinois’ single rate down to 3.75 percent in January, one legislator has proposed raising taxes on everyone making more than $12,500 a year, with a top rate of 6.9 percent. That is an increase of up to 184 percent.

Unfortunately, even with a shocking 184 percent increase, Illinois’ top income tax rate of 6.9 percent would still be lower than Wisconsin’s top rate of 7.65 percent.

The good news, however, is that our state is actually moving in the right direction. We are now on a path of sound fiscal policy and financial discipline. Wisconsin has reined in spending and enacted important collective bargaining reforms over the past three years, which saved the state from the brink economic disaster.

Now, Wisconsin needs to continue this tax-cutting trend. If we do, Wisconsin could be one of the earliest states to celebrate Tax Freedom Day, not one of the latest.