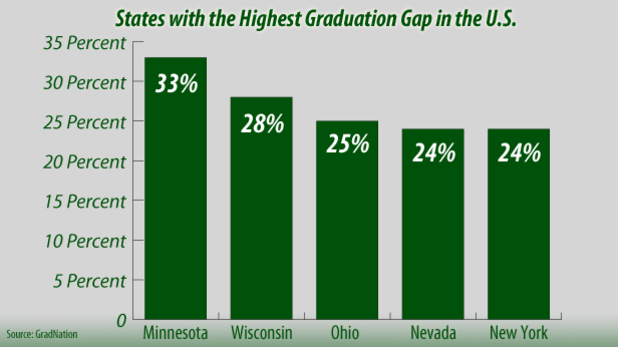 That’s the story from America’s Promise Alliance and their GradNation initiative. The group released their latest study, Building A GradNation: Progress and Challenge in Ending the High School Dropout Epidemic, on Monday. Their research looked at the Adjusted Cohort Graduation Rate (ACGR) of 47 states (Idaho, Kentucky, and Oklahoma were excluded) as an average of all students as well as by racial and economic characteristics.

While Wisconsin had the fifth-highest overall ACGR behind Iowa, Texas, Nebraska, and Vermont, the state continued its trend of troubling achievement gap numbers. 92 percent of the state’s white students graduated from high school in four years between 2009 and 2012, but only 64 percent of Wisconsin’s African American students could claim the same. That 28-point difference was the second-largest in the country. It trailed only Minnesota (33 points) in terms of the achievement gap.

The GradNation study also singled out performances in 39 large urban districts. This included Milwaukee, where 62 percent of the observed students graduated on time in 2012. The district finished 29th in overall ACGR, trailing cities like Memphis, Tennessee, Charleston, West Virginia, Baltimore, Maryland, and Chicago, Illinois. However, there was no achievement gap data included in this breakout chart.

These data further showcase a problem that has plagued Wisconsin for decades. Though the state has recently taken several steps to address the issue, this significant achievement gap has persisted in the Badger State with little effective progress. In April, State Superintendent Tony Evers called together a Task Force staffed by educators from schools with a track record of effectively educating all students in their classrooms. That group, led by Mequon-Thiensville Superintendent Dr. Demond Means, will meet for a second time this May with hopes of creating meaningful reform for the state’s K-12 schools.

This new study confirms what educational stakeholders have known in Wisconsin for years – that a look into high school graduation rates are simultaneously a cause for celebration and concern in the Badger State.