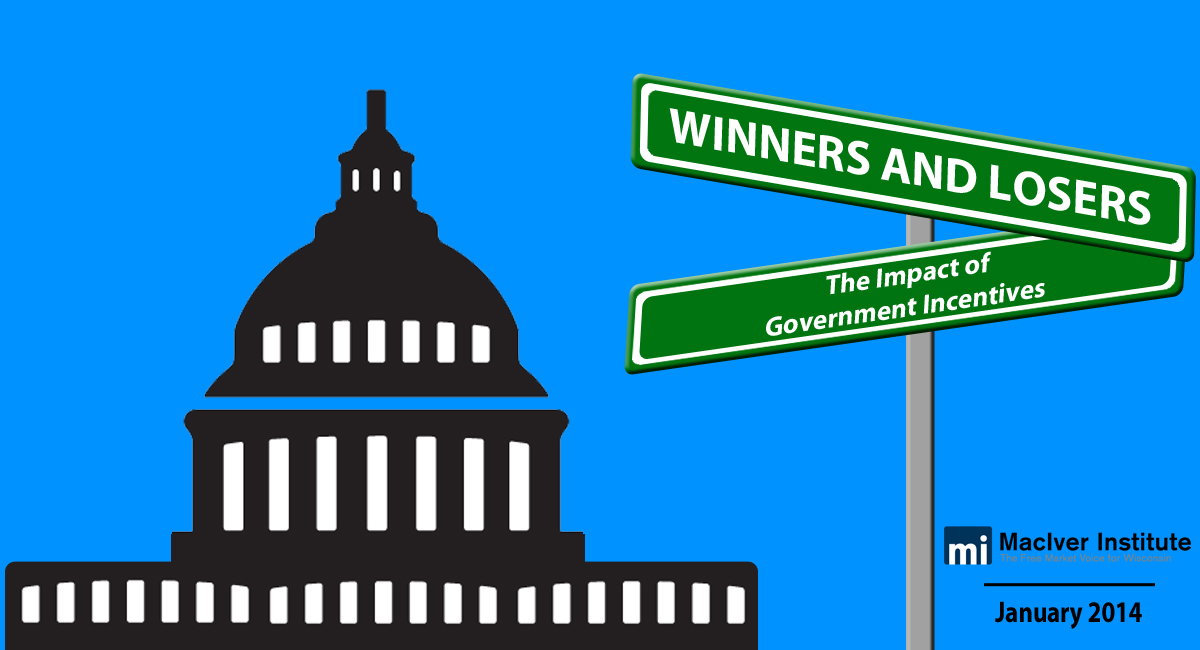 The term, “picking winners and losers,” gets thrown around a lot in the political world. The government does this each and every day with tax credits for new jobs created, subsidies to boost the price of a firm’s product, or even taxpayer-funded grants to build a new company headquarters.

The idea that the government can help stimulate economic growth and create new jobs sounds like a productive idea on the surface. Using taxpayer funds to invest in companies that create jobs is a good thing, right?

Not so much, according to the data compiled by the John K. MacIver Institute for Public Policy. Specific tax credits, subsidies, grants and other incentives only help the few. They may even harm economic development – the exact opposite of what the incentives strive for.

This report will review data from across the country that show government incentives are poor economic policy that create an unequal playing field for job creators nationwide.

Just for Starters, A Back-of-the-Envelope Review

Matt Mitchell, a Senior Fellow at the Mercatus Center at George Mason University, looked to see if government incentives were all they cracked up to be. He discovered that states with more incentives per capita actually have slower real economic growth.

“If local subsidies worked as advertised, we’d expect to see greater economic growth in those states that give away more subsidies. But simple analysis of [Louise] Story’s data suggests that, if anything, there is a negative relationship between per capita subsidies and economic growth,” Mitchell wrote for Mercatus Center.

“I also ran a series of econometric tests, sometimes controlling for other factors (regional effects, the initial size of state economies, and economic freedom) and sometimes not. In every test I ran, per capita subsidies were negatively associated with state economic growth and often the relationship was statistically significant (I should note that the Mercatus measure of economic freedom was always positively and statistically significantly related to growth).”

Tax Credits and Other Incentives

Many studies have shown the economic value of having a lower tax burden. Businesses and workers pay less to the government, so they have more to spend and invest in the economy. That, however, is the argument for lower taxes in general.

Tax credits, instead, create an unfair playing field. Only businesses that qualify for the tax credit are rewarded, which may give them an advantage over other firms in the market.

Scott Drenkard, an economist with the Tax Foundation, testified late last year in front of the Indiana Commission on State Tax and Financing Policy about tax policy.

“Even though credits lower the tax burden of a particular tax filer, in most cases we see them as poor tax policy,” Drenkard told the commission. “Some businesses might get the benefit of a preference, but other businesses that aren’t engaging in whatever activity is deemed “favorable” are stuck paying the full sticker rate of the tax.”

Bigger firms can use their vast resources to ensure they qualify for different tax credits. These firms normally have a government relations department that dedicates its time to finding and receiving government incentives. Smaller firms may not be able to compete, leaving them at a disadvantage.

Credits also pit state against state in a competition for businesses. The State of Washington’s legislature recently approved $9 billion in tax credits for Boeing, and the company still considered moving to a state with a better business climate.

The Admission of Failure

Boeing plans to begin production on their new 777X plane in 2017, and more than a dozen states rushed to offer incentives to the plane manufacturer, according to the Journal Sentinel. Wisconsin is one of the states that planned to make an offer.

As stated above, Washington already approved $9 billion in tax credits. But, Boeing still considered leaving the state until the labor union also approved a new contract that Boeing agreed to.

Experts argue that offering these massive incentives are actually an admission of failure. A state with a great business climate should be able to attract business without the need for extra incentives. If tax credits or other incentives are needed, the state is admitting it needs to work on making the climate better for all businesses.

A commonly used phrase among economists is, “the best economic development program is to not need one.”

A PEW study argues that such incentives could also drive other firms out of the market because of higher costs.

“An incentive might prompt the opening of a new meatpacking plant, driving up the price of local livestock. The new plant might be able to pay the higher prices whereas older plants without the incentive cannot,” the study reads.

So, offering Boeing a large incentive, like $9 billion in tax credits, may end up harming other local companies leading to job losses.

The key to a productive economy is for producers and consumers to find an equilibrium where supply and demand meet each other at a certain price and quantity. When businesses sell a product or service in a fair market that is typically what happens.

Producers will make products that consumers demand, and if they don’t, they will go out of business. That is described in the graph below:

Government incentives, however, change the environment between producers and consumers. Instead of providing a product or service that consumers demand, businesses will provide whatever they are incentivized to provide. In short, a company will expend resources to gain a government incentive, rather than produce what the consumer actually wants.

This is known as “rent seeking.” Rent seeking is socially wasteful and in the end will hurt consumers with higher prices and less competition.

Matt Mitchell described rent seeking in his report, The Pathology of Privilege.

“If managers and workers are less attentive to their work, consumers will derive less satisfaction from each product they consume. Thus, the demand curve for a privileged monopolist’s product will lie below the potential demand curve. Figure 3 shows this scenario as a downward shift in the demand curve. Because of the diminished demand for its product, the firm will sell less than it otherwise would. Consumers will derive less consumer surplus from exchange and total losses will expand as shown in figure 3.”

“There are also likely to be rent-seeking losses. The cost of rent seeking is related to the size of the rent in figure 3. The larger the rent, the more firms will be willing to invest in rent seeking. But other factors matter as well. For example, rent-seeking losses tend to be larger when more firms are competing for the privilege. This scenario is just the opposite of what we expect in a traditional market in which more competition leads to a more efficient outcome.”

Subsidies are another form of government incentives that can actually hurt economic growth. They artificially inflate the price of many items, but typically spread it over the entire country.

For example, taxpayers pay an extra $3.7 billion every year in sugar price supports. That is lot of money, but it only costs each man, woman, and child in America an extra $12 a year. It is very unlikely that anyone will write their congressman or fight against that small of a personal cost. But, the sugar farmers will lobby for it continuously because they each get a major chunk of that subsidy.

Even though this provides a nice incentive for the sugar industry, the sugar-using food and beverage industry has lost 127,000 jobs since 1997. At the same time, US and Mexican sugar production has increased up to 25 percent because of the artificial price supports leading to massive surpluses.

This is a real world example of firms producing a product based on the incentive, and not what the market demands.

While it may seem like a good idea to provide incentives to businesses in a state, the data shows that it is anything but. The government picks winners and losers, creates an unstable economy, and businesses will eventually make whatever gets them the best incentive from the government.

It is simple. Low (or non-existent) taxes that are more equitable across the board and fewer “winners and losers” incentives will lead to greater prosperity within a state. After all, the best economic development program is to not need one.