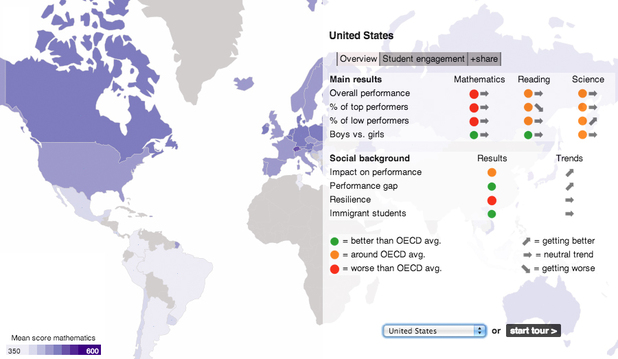 America, ranked 35th in math, trails even the Slovak Republic

The latest results of the PISA – Program for International Student Assessment – tests are in, and the United States can’t call its students a worldwide leader by any stretch. American 15-year-olds scored below the worldwide average in math and science proficiency in 2012.

While U.S. students prove to be slightly better in reading than the OECD (Organization for Economic Co-operation and Development) average, these same students are slightly worse when it comes to science. However, American students significantly trail the OECD standard for mathematics proficiency for high schoolers.

American pupils trailed countries like Vietnam, Iceland, Latvia, and the Slovak Republic when it came to understanding mathematics concepts. This landed the U.S. in 35th place out of 64 countries surveyed. American students finished 28th in reading and 24th in science as well.

These scores marked decreases in math and reading for the U.S. over the past decade of PISA testing. The country’s mathematics score has decreased from 483 in 2003, the first year of PISA math testing under its current framework, to 481 in 2012. In reading, the U.S. has slipped from an average score of 504 in 2000 to a 498 last fall.

Fortunately, science scores have not followed that trend. American students have increased their score from a 489 to a 497 since 2006, although that 2012 mark is still a decrease from 2009’s science average of 502.

These results are disappointing, but not entirely surprising for a developed western country. America’s peers in science, reading, and math amongst 15-year-old students tended to be countries like Spain, Italy, Portugal, and Sweden. Chinese regions Shanghai and Hong Kong were common staples at the top of the PISA average scores, along with Japan, Korea, and Finland.

The 2012 PISA scores reiterate the country’s need to focus educational efforts on literacy and STEM education tenets. Part of those efforts has been reflected in the country’s rising science scores, but the U.S. still trails the worldwide average in that category. Static proficiency rates will only allow over developed countries to pass America amongst the PISA rankings. Unless important measures are taken, American students could find themselves looking up at the worldwide average in a matter of years.