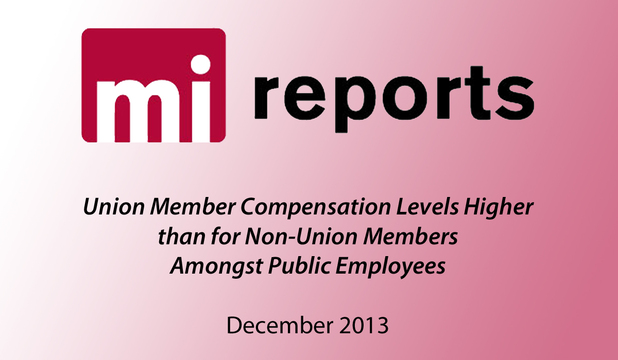 Union represented public employees in Wisconsin have higher average salary and benefit packages than employees not represented by a union according to a new report by the John K. MacIver Institute for Public Policy.

Wisconsin’s public employees in unions make 7.8 percent more in salary than their non-union colleagues and 7.9 percent more when benefits are included. This is referred to as a “union premium.” Wisconsin’s premium is greater than the national average of 6.8 percent and 7.4 percent respectively.

Compensation estimates were calculated based on data available between 2008 and 2012.

Union members have greater power to collectively bargain for higher compensation (wages and benefits), which shows in the data. Of course, this differential may decrease in coming years as Wisconsin’s 2011 Act 10 is fully implemented. Act 10 limited public employees’ ability to collectively bargain, which will likely balance compensation levels for represented and non-represented employees in the future.

The new report is based on data collected by William Even, Professor of Economics at Miami University in Ohio, and David Macpherson, Professor of Economics at Trinity University in Texas. The data compares state and local government workers’ compensation differentials. Even and Macpherson analyzed a sample of 1,461 Wisconsin public employees in addition to every other state.

Nationwide, the more education an employee has, the smaller the premium a union employee will see. Individuals with a high school degree or less have an 8.6 percent compensation premium, while it drops to 8.3 percent with some college, and 3.8 percent with a college degree. Union public employees with a high school degree in the Badger State have an 8.5 percent premium on compensation and a 4.6 percent premium with a college degree.

While a public employee with a high school degree will make 8.5 percent more as a union member in wages and benefits, that number drops to 6.8 percent when only wages are considered. There is a drop at every education level, which provides that union members see higher wages, but even higher benefit packages.

The data is also broken down into five categories of occupations: Education, Office and Administrative Support, Protective Services, Management, and Other.

Unionized public employees in Wisconsin who fall under the education category have a 6.4 percent premium for wages and benefits when compared to their non-union colleagues. The only other category that was statistically significant was other, which includes legal occupations, cleaning and maintenance, transportation and others. That category has a 7.7 percent union premium in the Badger State.

Information about the data used in this report is available here.