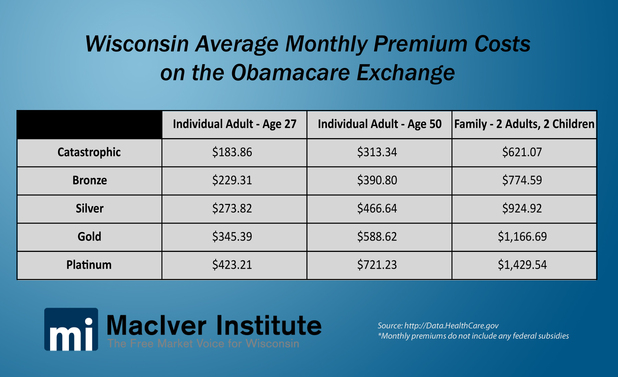 Average Premium for a Family of Four in Wisconsin Ranges from $621 for a Catastrophic Plan to $1,430 for a Platinum Plan

[Madison, Wisc…] Rate information for every health insurance plan in Wisconsin through the Obamacare exchange is now available to the public, albeit buried in a database on a complicated federal website.

A MacIver Institute analysis of this data found the most expensive plan on the Obamacare exchange in Wisconsin is a platinum plan for a family of four with a monthly premium of $1,852.10. On the other extreme, the cheapest plan available is a catastrophic plan for a 27 year-old individual with a premium of $109.29.

The average healthcare premiums on the Obamacare exchange in the Badger State will cost $184 to $1,430 per month depending on the plan according to the analysis by the MacIver Institute.

This is the first time that MacIver has found details regarding premiums in Wisconsin. The Wisconsin Office of the Commissioner of Insurance (OCI) told the MacIver News Service two weeks after Obamacare’s launch that there was supposed to be a government website collecting and distributing raw data about the system, but that it still wasn’t up.

The MacIver Institute finally found the federal government’s master spreadsheet of rate information for every health insurance plan in the country available through the exchange at data.healthcare.gov. The website is complicated, but this link will take you directly to the spreadsheet.

MacIver calculated the averages in each of the five categories for three different types of plans: individual aged 27, individual aged 50, and a family of four. An individual can stay on their parents’ insurance until the age of 26.

Dave Jensen, HCTrends Editorial Director, said that this data available from the federal government still does not give a clear picture of what family premiums will be in Wisconsin.

“Our preliminary analysis indicates the average family premium will actually be significantly higher. The government’s estimate appears to be based on young families where the head of household is 30 years old and the children are 5 and younger. That same health plan would cost 57 percent more for a family of four with parents who are 50 years old,” Jensen told the MacIver Institute. “Not only is this age group closer to the median age of the Wisconsin residents who can participate in the exchange, it is also the age group least likely to qualify for federal subsidies due to their household income.”

Prior to the launch of healthcare.gov, there was no premium rate information for Obamacare available to the public. However, OCI predicted rates would increase across the state. Its analysis showed the younger a person, the more their premiums would go up. The biggest change would be for 21 year-olds in Madison. OCI predicted their rates would increase 124.85 percent.

MacIver contacted OCI multiple times on Monday and Tuesday to see if the office had collected any data comparing the new rate averages to the rates prior to Obamacare. However, the office did not respond as of late Tuesday morning.

Different parts of Wisconsin deviate from the state averages that MacIver calculated. Milwaukee County will face some of the highest cost premiums in the state. The average premium for a catastrophic, silver, and platinum plan respectively will be $665.67, $1,001.31, and $1,677.18 for a Milwaukee family.

Brown County, home to Green Bay, has lower premiums than the state average as well, except for platinum plans. A family of four will have an average monthly premium of $569.64 for a catastrophic plan, $883.54 for a silver plan, and $1,506.24 for a platinum plan.

Premiums in Eau Claire County are higher than the state average, and the Obamacare exchange does not offer a platinum plan in the county. Families will have an average monthly premium of $687.35 for a catastrophic plan and $1,051.68 for a silver plan.