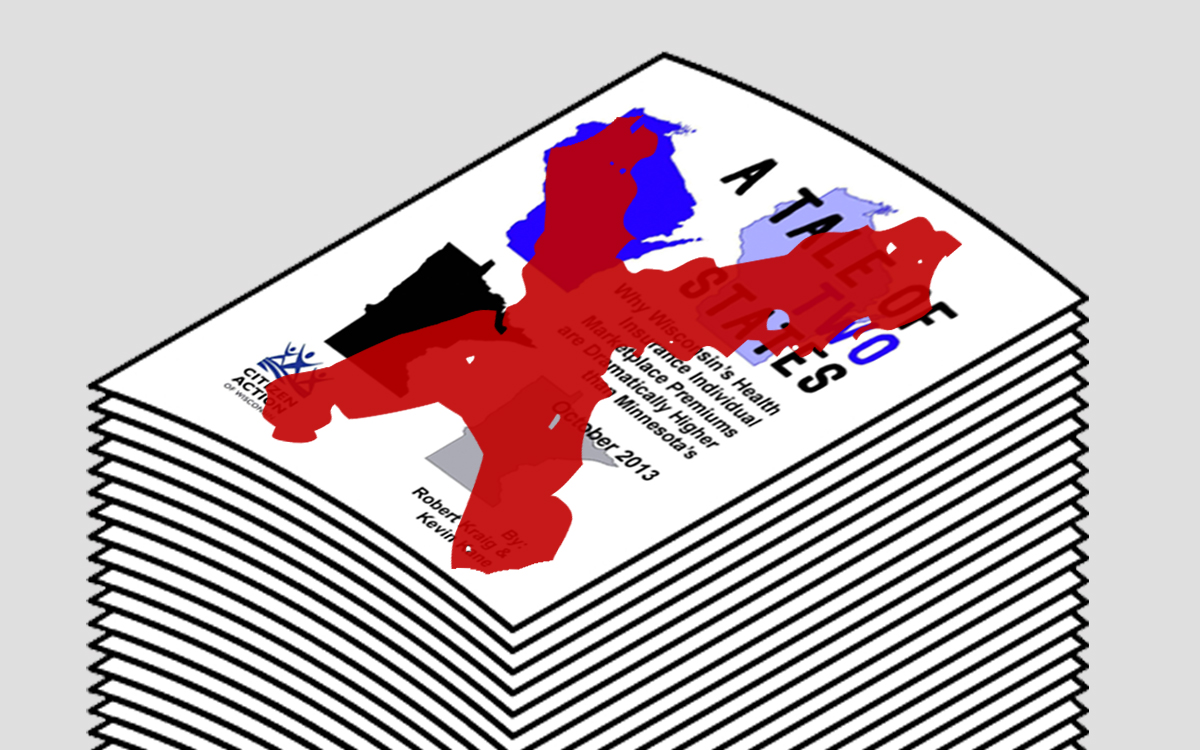 [Madison, Wisc…] Citizen Action of Wisconsin seems to have cherry-picked data and overlooked major factors while laying out its argument that Minnesota has lower health insurance premiums than Wisconsin because of certain policy decisions each state made.

The self-described issue focused coalition released a report on October 23rd that claimed Wisconsin has higher health care premiums under Obamacare because the state rejected the Medicaid expansion, did not set up its own exchange, and lacks a comprehensive health insurance rate review process.

An analysis by the MacIver Institute has found many holes in Citizen Action’s report, including many instances of inaccurate and incomplete data.

The first problem with Citizen Action’s analysis is its misrepresentation of rates in Minnesota. The report relies on information released by the federal government on September 25th that only included health care rates for the Minneapolis-St. Paul area, instead of the whole state.

By leaving out areas like Rochester, where rates can reportedly be double what they are in the Twin Cities, the average used by Citizen Action could be much lower than the real state average of Minnesota.

Secondly, in addition to the data being incomplete, it is also out-of-date. The federal Department of Health and Human Services released the data used by Citizen Action prior to the federal or state exchanges beginning enrollment. Official rate information was not available until after October 1st.

The RAND Corporation, an international public policy research organization, compiled data that was used in the HHS report and warned of its limitations.

“Current data sources on enrollment and premiums in the nongroup market are limited, and – as a result – we cannot be certain whether we are accurately reproducing nongroup premiums and enrollment patterns under the current law,” the RAND report reads. “As a result, the model is more useful for identifying patterns that vary systematically across states than for generating precise estimates of nongroup enrollment and premiums on a state-by-state basis.”

Thirdly, Citizen Action’s assertion that Wisconsin has higher premium costs because of the state’s decision to reject the Medicaid expansion and not develop a state-run exchange is simply not true when you look at other states.

According to HHS’s chart (which includes 47 states plus DC), Tennessee, which neither expanded Medicaid nor created its own exchange, has the 2nd lowest premiums in the nation for the lowest cost silver plan.

There are also states that both expanded Medicaid and set up a state-run exchange that have higher premiums than Wisconsin.

Connecticut is one of those states. Its premiums are 15 percent higher than Wisconsin’s according to the HHS data that Citizen Action used. Vermont and Washington are also higher.

Looking to other parts of the country, some neighboring states have the opposite relationship that Wisconsin and Minnesota do.

Oregon and Washington are neighbors. Both states expanded Medicaid and set up state run exchanges, but rates in Oregon are $100 a month cheaper than in Washington.

Nevada and Utah also share a border. Nevada expanded Medicaid and set up a state run exchange and Utah did neither. However, Utah has rates as much as $56 a month cheaper than in Nevada.

According to an analysis by HCTrends, a health care research organization based in Milwaukee, there is no statistical difference in premiums between states that rejected the Medicaid expansion or created a state-run exchange and those that did not.

The median premium for states that accepted Medicaid ($319) is 3 percent lower than in states that did not ($328).

Finally, Citizen Action claims that Minnesota has “used a robust rate review process” to lower health insurance rates in the state and claims Wisconsin does not have the same oversight.

J.P. Wieske, spokesman for the Wisconsin Office of the Commissioner of Insurance (OCI), told the MacIver Institute that Wisconsin can and does send out rates for actuarial review to make sure the health insurance company’s assumptions are correct. He also said the federal government approves of the rate review process.

“It is considered an effective rate review process,” Wieske said. The federal government determines whether each state has an effective process, and if it does not, the feds will take it over.

Agreeing with statements from OCI, Greg Skemp, sales and marketing director for the Gundersen Health Plan, told the La Crosse Tribune that Citizen Action’s biggest flaw in its report was that the state lacks oversight of health care rates.

“Rate review is alive and kicking in Wisconsin,” Skemp said.

This analysis proves that Citizen Action did not tell the whole story in its report, and it is clear the organization used misleading information just to create a catchy headline.