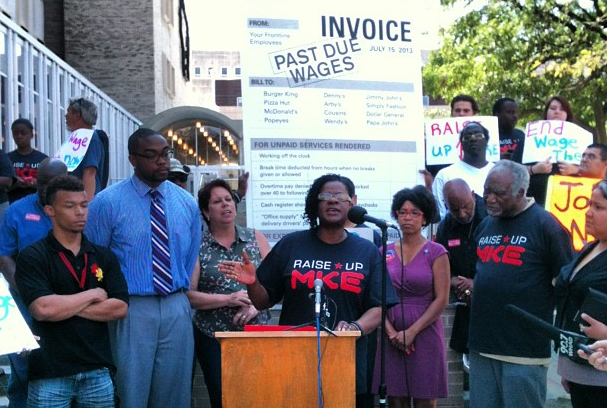 [Milwaukee, Wisc…] U.S. Rep. Gwen Moore (D-Wisconsin) spoke in Milwaukee on Monday as a part of the “Raise Up America” campaign, lead by the Congressional Progressive Caucus, to increase the federal minimum wage from $7.25 to $10.10 in spite of economists claims that this will hurt low-skilled and young workers.

The Milwaukee Journal Sentinel reported on the event where Moore claimed that the current minimum wage is much too low, and individuals that make minimum wage cannot even afford their basic needs.

Unfortunately for Moore and her Congressional colleagues, the MacIver Institute released a report last year that showed the negative effects of increasing the minimum wage.

That did not stop Moore from suggesting that the minimum wage should be increased.

On Monday, three members of Congress donned “Raise Up MKE” T-shirts and echoed that message, discussing wage stagnation and what they consider employee exploitation during an event at the Department of Workforce Development downtown.

U.S. Rep. Gwen Moore (D-Wis.) said that when people ask her why the minimum wage should be raised during a recession, she points out that at the current minimum wage, a worker earns about $15,000 a year, far below what is needed for “basic sustenance.”

Moore said it is worth noting that companies hiring low-wage workers “are not your mom-and-pop diners — they are Fortune 500 companies, and 92% of them had profits in the last year.” She added that low-wage workers are likely to spend the majority of what they earn, boosting the economy.

When fast-food worker protests sprung up in numerous cities earlier this year, restaurant industry representatives said higher wages would be difficult to sustain.

Since the minimum wage increase in 2005 from $5.15 per hour to $5.70 per hour, more than 7,000 teenagers have been put out of work, as of July 2012, based on analysis by the MacIver Institute of studies by Economists David Macpherson of Trinity University and William Even of Miami University.

When the report was released, Brett Healy, President of the MacIver Institute, said that raising the minimum wage would only hurt low-income individuals.

“Raising the minimum wage prevents teens and other low-skilled workers access to the ground floor of the workforce, which potentially increases their draw on federally-backed financial aid for higher education and ultimately for food stamps, Medicaid and other programs,” Healy said.

The full report on minimum wage increases in Wisconsin can be seen here.