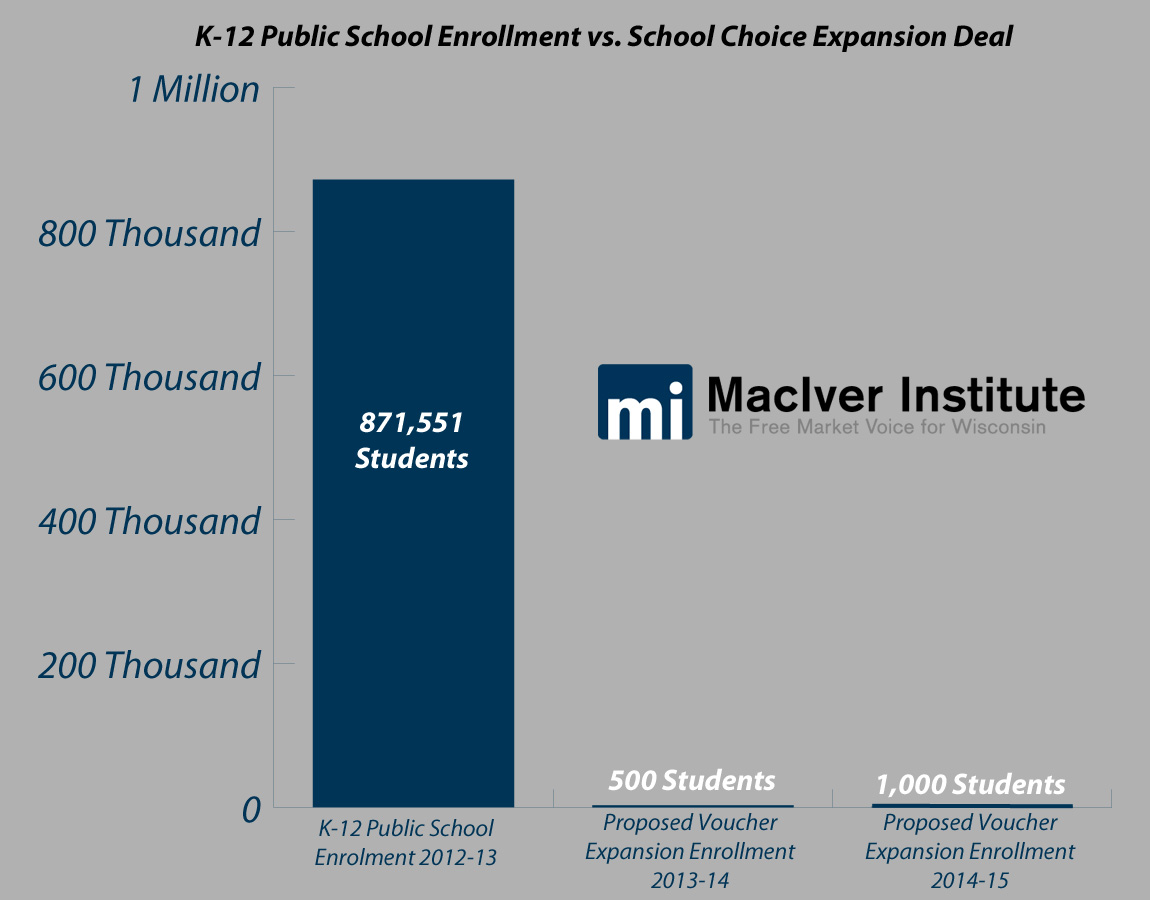 It leaked last week that there was a deal on the table for a new direction of the state’s school choice expansion, and it is very different than the plans outlined in Governor Scott Walker’s 2013-2015 budget proposal.

Wisconsin would become home to two new school choice programs in 2013, according to a proposed education plan that came to light last Wednesday night. The first would be a statewide voucher expansion that would be limited to 500 students in its first year and be available to any family that earns less than 185 percent of the Federal Poverty Level. The second is the Education Income Tax Credit (EITC) for families that are sending their children to private schools, which is expected to cost about $50 million.

The proposed voucher expansion would apply to a very small portion of Wisconsin’s students. The new voucher would have participation limits of 500 pupils in the first year and 1,000 in the next. It would take further legislative action to expand the capacity of the program beyond that, and since it would be funded by General Purpose Revenue (GPR) money, an expansion seems unlikely in the near future.

500 students constitute 0.057 percent of what the Wisconsin K-12 student population was in 2012-2013. 1,000 students barely moves that figure past one-tenth of one percent. This voucher expansion would almost assuredly run up against these caps and necessitate a lottery program to choose recipients at random when demand outstrips this limited supply.

Compare Wisconsin’s modest 500/1,000 first/second year participation cap to other states. Indiana enacted one of the widest reaching voucher programs in the country in 2011. In that program’s pilot year, vouchers were limited to 7,500 students. In its second year, that number doubled to 15,000. After those first two years, participation is now uncapped.

That uncapped participation is something that has been successful in Pennsylvania, a state that uses corporate tax credits instead of individual tax credits to fund scholarships for more than 45,000 students in the state.

A recent school voucher plan in Tennessee was planned to start at 5,000 students and expand to 20,000 by its third year until Governor Jimmy Haslam shut it down under pressure from state legislators that it wasn’t far-reaching enough. On a national scope, Wisconsin’s very modest expansion lags far behind other efforts across the country.

In fact, these limited participation numbers don’t even measure up to the voucher programs that already have taken root in Wisconsin. The Milwaukee Parental Choice Program, America’s first modern school choice system, served 24,027 students in 2012-2013. That constituted 24.6 percent of the city’s student population. In Racine, 499 students took advantage of the Parental Private School Choice Program, which was capped at 500 vouchers for its second year. That represented 2.7 percent of the district’s population, and only stands to grow when the program sheds its cap in the third year of existence.

These participation limits aren’t the only proposed rules that will hinder the effectiveness of a voucher program outside of Milwaukee and Racine in Wisconsin. The proposed program would only allow up to one percent of students in each district to participate in the voucher program. This seems excessive in the midst of a program that will ultimately effect just .011 percent of the state’s overall student population.

It also fails to hold struggling districts accountable when students want to leave to find the school that fits them the best. This limit, combined with the state’s three-year enrollment averages, will essentially hold districts harmless when pupils decide to leave. While this protects many public schools, it also fails to produce any real consequences for a district that is failing to provide schools that its local parents and students are happy with.

Another potential issue may be income limits. While it’s not known – and unlikely – that there will be a restrictive income cap on the proposed EITC, the state’s voucher expansion will be limited to families that earn less than 185 percent of the poverty level. This will ensure that vouchers averaging $7,000 will go to the neediest families, but it’s also a step back from 2011’s voucher expansion in Milwaukee and Racine, which included students from households that earned up to 300 percent of poverty. Ideally, an expansion of participation caps would also include more room for families who are looking for a way to access the education that fits their children the best.

The proposed Wisconsin EITC is a good idea, in theory – but a long list of regulations will effectively strip the program of its usefulness and represents a step backwards from the voucher expansion that had been proposed before it. States like Florida, Pennsylvania, Georgia, and Arizona have shown that tax-credit scholarships can be an efficient and effective method of school choice, but Wisconsin’s plan deviates greatly from these successful stories.

The voucher program is similarly well intentioned, but its limits effectively restrain it to a small niche in the Wisconsin K-12 community. These programs simply don’t have the scope to be significant educational reform.

Compound that small scope with the abandonment of other policy changes like additional funding and creation of a state oversight board for charter schools, and this new direction seems even worse for Wisconsin.

This new education deal, if the current reports are accurate, is a step back from the reform proposed by Governor Walker and a veering turn off the path of change that was blazed by policies like the Racine voucher program, school report cards, and the Read to Lead program in 2011. The proposed plan seems like lip service to reforms like vouchers and tax-credit scholarships, but with such a limited scope and no realistic avenue for expansion, that’s all that they’ll be, leaving students in the cold.

The Joint Committee on Finance plans to take up education spending and the school choice expansion on Tuesday. The MacIver Institute will provide more details about this plan as they become available.