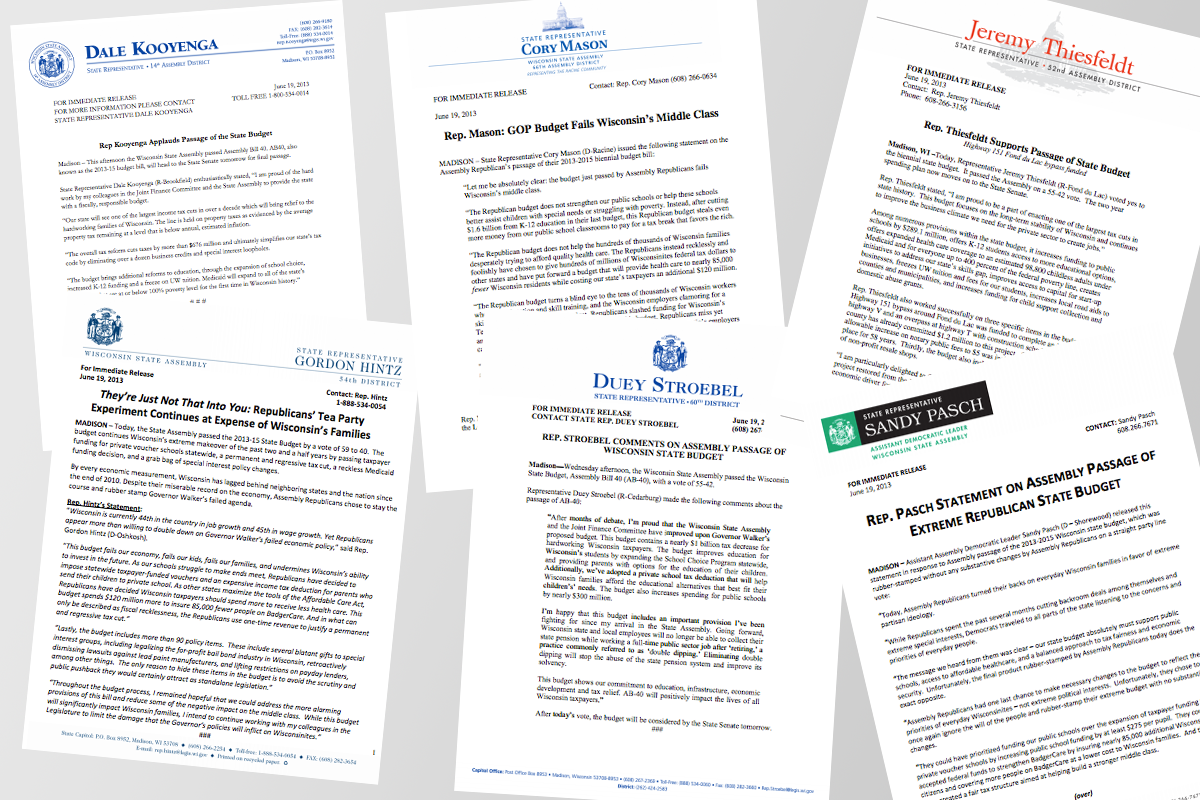 Our state will see one of the largest income tax cuts in over a decade which will bring relief to the hardworking families of Wisconsin. The line is held on property taxes as evidenced by the average property tax remaining at a level that is below annual, estimated inflation.

The budget brings additional reforms to education, through the expansion of school choice, increased K-12 funding and a freeze on UW tuition. Medicaid will expand to all of the state’s population that are at or below 100% poverty level for the first time in Wisconsin history.

I am proud to be a part of enacting one of the largest tax cuts in state history. This budget focuses on the long-term stability of Wisconsin and continues to improve the business climate we need for the private sector to create jobs.

We gave them one of the largest income tax cuts in state history while cutting bonding and spending. Our actions will decrease taxes by nearly $1 billion.

Unfortunately, after weeks of complaints and criticisms, Assembly Democrats refused to debate or even offer a single amendment. I do not believe Wisconsin is served well when one party refuses to represent their constituents in a debate.

This budget is in the best interest of all Wisconsin residents. It increases funding for public schools, and strengthens safety nets for our most vulnerable. It also includes one of the largest tax cuts in our state’s history and updates our archaic tax structure – key factors to improving our economy.

Going forward, Wisconsin state and local employees will no longer be able to collect their state pension while working a full-time public sector job after ‘retiring,’ a practice commonly referred to as ‘double dipping.’ Eliminating double dipping will stop the abuse of the state pension system and improve its solvency.

The budget improves education for Wisconsin’s students by expanding the School Choice Program statewide, and providing parents with options for the education of their children.

Unfortunately, they chose to pass a budget that puts their extreme political ideology ahead of the best interests of Wisconsinites.

Today, Assembly Republicans turned their backs on everyday Wisconsin families in favor of extreme partisan ideology. While Republicans spent the past several months cutting back room deals among themselves and extreme special interests, Democrats traveled to all parts of the state listening to the concerns and priorities of everyday people.

This budget fails our economy, fails our kids, fails our families, and undermines Wisconsin’s ability to invest in the future.

This budget is an affront to Wisconsin’s values, and priorities a far-right ideological agenda and special interests over Wisconsin’s families. I am deeply disappointed that the Republicans have so completely abdicated their responsibility to Wisconsin’s middle class.

Sometimes I have to remind myself that it is 2013 and I live in Wisconsin because the priorities and the legislative agenda of the Republicans looks like something we might have seen over 40 years ago in the South.

It baffles and frustrates me that the majority party does not have the same priorities as the majority of Wisconsin residents. There’s a complete disregard for public education, disdain for quality health care, contempt for our unique natural resources, indifference to the middle-class and zero vision for the future.